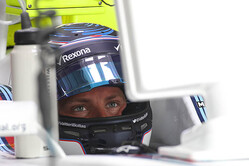 Kuala Lumpur's Sepang International Circuit was first in the spate of modern tracks in emerging markets for Formula One. The likes of Bahrain, China, Singapore, South Korea and India would later follow, but Hermann Tilke's first foray into Asia set a new standard and lay pressure to modernise on the historic European circuits. One feature the more traditional venues could not apply is the tropical Malaysian climate, which has unleashed spectacular downpours on Formula One sessions over the last 15 years. Williams' only victory at Sepang came in 2002 with Ralf Schumacher leading home team-mate Juan Pablo Montoya in a 1-2.

Pat Symonds: The new date for Malaysia takes us to the first of two circuits that really stretch the car after the confines of Singapore. In Kuala Lumpur we also have the challenge of extensive changes that have been made to the track. As well as the complete resurfacing of the track there is also some realignment which has been specially designed to improve the racing. It will be interesting to see how successful it is, and if it acts as a pointer to future circuit modifications. From a performance point of view, of course, the focus is on the very high temperatures and humidity which not only affect the car set-up but also take a high toll on the drivers. The circuit is tough on tyres and hence we move up the spectrum once again using the hard, medium and soft compounds. There are several high-speed long corners where loading dictates the advantage of the more robust compounds. The circuit has good overtaking opportunities and we can expect an exciting race but, as always in Malaysia, we will be keeping a very close watch for the heavy rainfall that can disrupt this event.

Valtteri Bottas: Malaysia has changed places in the calendar so it's going to be just as hot and humid as Singapore and another very physical race for the drivers. It has a nice mix of both high and low-speed corners. We normally score strong points at Sepang. Overall, it's an enjoyable track to drive and I'm really looking forward to going back for another year.

Felipe Massa: Malaysia is another very difficult race in the calendar because of how hot and humid it is. It rains there almost every day, and when it rains it's normally torrential so it covers the whole track. The race is just so dependent on the weather, but I really hope we can do well there and have a good result. I was sixth there last year, I hope this year I can perform even better!