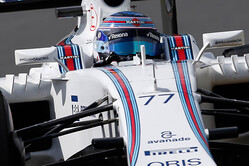 Valtteri Bottas qualified fifth and Felipe Massa 11th for the Italian Grand Prix. Both cars progressed from Q1 into Q2 after one run each on the supersoft tyre, with Valtteri advancing through in P8 and Felipe in P12. Valtteri went out for one timed lap in Q2 on new supersofts, and his lap was enough to easily get him through to Q3 in P4. Felipe had two timed laps in Q2, but wasn't able to improve his time on his second attempt and ultimately finished just outside the top ten in P11. Setting two timed laps in Q3, Valtteri put in a great lap on his second attempt and finished in P5 with a 1:22.388.

Rob Smedley, Head of Performance Engineering: Overall I think it's been a positive session for us, and a good weekend so far. I was fairly confident going into qualifying that we could get a result like this. Valtteri has absolutely maximised everything he could, and managed to get us ahead of the two Red Bull's as well which will be great for the race tomorrow. Felipe wasn't able to quite get his lap together in Q2 unfortunately, but starting P11 gives us a free choice of tyres and he showed great pace on Friday, so we can still get a lot from starting in that position.

Valtteri Bottas: I felt it was a very good qualifying today. Fifth is a good position to start in and I'll be on the clean side of the track, so we definitely maximised the potential of the car. I felt I did one of my best qualifying's ever. I think we have a good chance to score some good points and I hope Felipe can also come back from P11 with a free choice of tyres to get some strong points for the team.

Felipe Massa: P11 is not where we expected to be today - we thought we would get into Q3 quite easily, so it's a bit disappointing. I had to go very slow on my outlap before my second run in Q2, and as a result the tyres lacked the grip I needed to improve my time and everyone else was going quicker. The benefit is that I get a free choice of tyres tomorrow for the race which will help us with the strategy, so hopefully we can make the most of that.