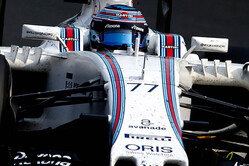 Valtteri Bottas qualified eighth and Felipe Massa 10th for the Belgian Grand Prix. Valtteri progressed from Q1 into Q2 in P10 after his opening run on the supersoft tyre. As a result of a software issue that affected both drivers Felipe was forced to use up another set of supersoft tyres. With a clear track Felipe was able to comfortably progress in P1.

In Q2 Felipe and Valtteri both secured their places in Q3 in P6 and P7, with their only run in the session. Valtteri was the first driver out on track in Q3. On his only flying lap he set a time that was good enough for P8 overall. Felipe only had one new set of supersofts available for Q3 and locked up into turn one on his only flying lap, which cost him a lot of time. Unable to set another time on his worn tyres Felipe had to settle for P10.

Rob Smedley, Head of Performance Engineering: Qualifying was disappointing for us. We had a software issue with the power unit which meant that we weren't able to run qualifying mode, so we lost lap time there. Without that we would have been around fifth position. It unfortunately put us on the back foot in Q1, after we discovered it on our first run and had to react accordingly. Most of our efforts were then focused on trying to resolve the issue rather than making our car go quicker, so it's somewhat ruined our qualifying. Apart from that, the cars were reasonably well balanced. Going into the session we knew it was going to be tight with Force India, but we had a little bit of a margin on them so it's a shame not to be ahead. We've all got to pick ourselves up now, accept that these things are part of motor racing, and look forward to tomorrow. The long runs we were doing both yesterday and this morning were very encouraging. We just need to make sure we get everything right tomorrow and outscore those around us in the championship.

Valtteri Bottas: Obviously it was a bit of a problematic qualifying session for us. Considering the software issues we had, I think we performed like we should have. It's a shame that we had the issues because it meant we couldn't get a top six position. At the end of the day, the race is tomorrow and that's what counts. The car felt better today than yesterday so we've already made progress. Our long runs in practice looked good in terms of the race pace, so I think we can have a strong race tomorrow, even though we didn't get the perfect result out of today.

Felipe Massa: I had a software issue in Q1 which caused a misfire so I couldn't put a lap together. That really didn't help my qualifying, because I only had one set of supersofts left for Q3. I gave it everything on my final lap, but I locked the front into turn one and lost a lot of time, so I'm not happy with that. If I had two sets of tyres in Q3 it would have helped me a lot, but that didn't happen so we lost a few places. We will see what we can do tomorrow though. I was happy with the car, the balance and the laptimes in qualifying.