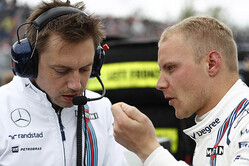 Valtteri Bottas finished 9th whilst Felipe Massa retired from the German Grand Prix. Felipe started P10 but was clipped on the opening lap by Palmer's Renault which affected the car's pace. The issue couldn't be identified or resolved during the race, therefore he was forced to retire on lap 36.

As a result of Hulkenberg's one-place grid penalty, Valtteri started today's race from P7 on the supersoft tyre. He moved up to P5 in the early stages of the race, benefitting from his competitors pitting, before dropping back to P7 ahead of Hulkenberg. Following Hulkenberg's final stop Valtteri was 15 seconds clear of the Force India but with severely worn tyres Valtteri wasn't able to hold onto the position and fell to P9, ahead of Perez, in the closing stages of the race.

Both drivers retain their positon in the Drivers' Championships with Valtteri in seventh and Felipe in ninth, while the team stays fourth in the Constructors' Championship, 15 points clear of nearest rivals Force India.

Rob Smedley, Head of Performance Engineering: Felipe was hit in the rear in Turn 6 on lap one and there wasn't a great deal we could do from then on. We were trying to understand what the problem was as Felipe was completely off the pace and complaining about the car. There was no alternative other than to retire because he was towards the back of the field and struggling. With Valtteri, we tried a strategy which clearly didn't work. We deployed the wrong tactics in the race, which is something we've got to learn from. As a group of people, we get it right most of the time, but today we didn't. We thought the tyres would go to the end but they didn't and so ninth was the best we could achieve, unfortunately. It hasn't been a great day but this is where we see the mettle of everyone moving forward and make sure we don't let our heads go down. We'll carry on improving and trying to do the absolute maximum that we can do with the car that we've got. We'll keep pushing on.

Valtteri Bottas: The race was going OK until Force India managed to get in front of us with the undercut. They did a three-stop and we tried a two-stop. There was definitely something wrong with our tyre calculations, because there was no way to get to the end on that set of tyres. The stint was just way too long and that really cost us some points today.

Felipe Massa: It's such a shame that someone hit my rear right tyre on the first lap because it felt like something definitely happened to that area of the car. Perhaps a toe issue or something, because the car felt undriveable. Although I tried to carry on with the race, I was suffering massively. The pace was just so slow to the point where it was better to retire than carry on. Now, I'm going to take the summer break as an opportunity to relax with my family and prepare for the second half of the season to make it much better than the first half.