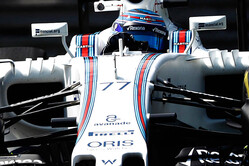 The Spa-Francorchamps circuit is one of Formula One's most iconic and revered. The extreme climb through Eau Rouge with clouds of spray hanging between the trees of the Ardennes forest is one of the sport's most memorable sights. Spa is one of precious few circuits to retain the magic of its original form through a modernised and shortened layout, thanks to sweeping elevations around legendary sections of road at Eau Rouge, Pouhon and Blanchimont. The 7km lap is perhaps the most treasured of the season for the drivers. Williams has won three times at Spa with Nigel Mansell claiming the 1986 race, followed by Damon Hill in 1993 and 1994.

Pat Symonds: The first thing to say is that we expect dry and warm weather all weekend which is not typical of the conditions that we tend to see in Spa. The circuit itself is quite interesting with high power and drag sensitivity favouring low drag and powerful power units. Top speed is particularly important, so most cars are set-up with low drag, compromising speed in sector two to give them better opportunities to overtake into turns five and 18. Teams also tend to run cars quite stiff as you need good change of direction and whilst Eau Rouge is no longer a difficult corner, you still need to be cautious with ride heights to ensure the car doesn't bottom-out there. Spa places high demands on tyres. In typical cool temperatures we would expect to see front graining at the start of the weekend with more even front and rear wear by race day. We are back to medium, soft and supersoft compounds which we have plenty of experience with this year, which combined with the 7km lap, means we expect to see most cars on two-stop strategies. Spa is a circuit which should favour us and our target will be to challenge from the start to get some good points.

Valtteri Bottas: This is definitely one of my favourite tracks, mainly because of the high speed corners. It's extremely enjoyable to drive. It's normally quite a good track for us, the only thing with Belgium is that the weather can be quite unpredictable across the weekend. It's definitely one of the best circuits in the world so I'm really looking forward to going back. We were on the podium there in 2014, so that's a good memory. I've also had quite a bit of success in Belgium with Formula Renault, Formula 3 and GP3 so it's always one of the best tracks to go to for me.

Felipe Massa: Belgium is one of the best tracks in Formula One. Most of the drivers love the old style, including me. I'm really looking forward to having a great race at Spa. It's a place that can be wet and dry pretty much at the same time, so I hope it will be a good weekend for us and that we have a fantastic race. It's always a pleasure to race there and feel the car perform at one of the best tracks in the world. I've got great memories from Belgium - I've been on the podium and I won there in 2008. It's definitely a place I always enjoy visiting and a great pleasure to race around.