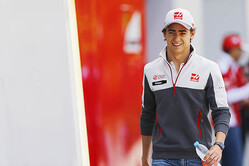 Esteban Gutierrez has said he is setting a two week deadline in terms of his plans for 2017.

While Haas has made it clear that it intends taking its time in finalising its line-up for next year, Esteban Gutieerez says he doesn't have that luxury.

Consequently, the Mexican, who says he now has other options, has set a two-week deadline.

"Haas have been very clear in the media, they want to wait a few more races," he told reporters in Mexico City today.

"However, we are now considering something and it will be important to close something soon as we cannot afford to wait to a few more races," he added.

Asked if there was deadline on a decision from Haas, he said: "The deadline should be in the next two weeks."

While it is unclear what his options might be, the youngster was noticably enthusiastic when it was suggested than he partner Serghio Perez at Force India.

The 2010 GP3 champion, and Ferrari test and reserve driver, has yet to score a point this season.