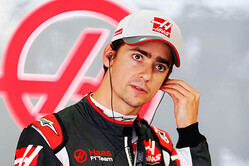 Brake manufacturer Brembo is to investigate the cause of the failure that led to Esteban Gutierrez' retirement from the US GP.

Starting from fourteenth on the grid, the Mexican improved to tenth before a brake issue saw his car run wide and subsequently retire. Prior to the incident he and teammate Romain Grosjean had both been in the points at what is their team's home race.

"The first stint was very strong and we managed to get into the Top 10, fighting hard and pushing to the maximum,!" said the Mexican. "Unfortunately, a brake problem ended our race. It's not what we wanted or expected to happen, but we need to continue working very hard as we head to Mexico."

In a rare move, Brembo subsequently issued the following statement: "In relation to what happened to the driver Esteban Gutierrez of Haas F1 Team during the United States Formula One Grand Prix, Brembo regrets that the withdrawal of the driver at the end of lap 17 was caused by a possible issue connected to the braking system.

"After a first analysis of our technicians present at Austin, it would seem that in correspondence with the front left wheel a problem in the dragging area of the disc has been identified.

"It will be Brembo's responsibility to carefully investigate, in collaboration with the team, the causes that led to the technical issue".