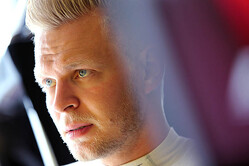 Having been kept on tenterhooks by McLaren in recent years as it decided on whether to retain Jenson Button, finally being released last year as the Woking outfit switched focus to Stoffel Vandoorne, Kevin Magnussen is getting used to being kept waiting.

However, as all manner of drivers are linked with Renault, and there are other possible vacancies on the 2017 F1 grid, Magnussen is giving the French team two more weeks in which to make a decision.

While there is talk of Magnussen and teammate Jolyon Palmer being retained for a second year, it is known that the French outfit made overtures to Carlos Sainz and also looked at Sergio Perez, while it is also keen to promote Esteban Ocon, currently with Manor, from reserve driver to a full race seat.

Having had a difficult return as a manufacturer, mainly because of its eleventh-hour purchase of the Lotus team, better things are expected next season and Magnussen wants to be part of it.

Revealing that he has exercised an option in his contract giving the team a further two weeks in which to make a decision, Magnussen told reporters at Suzuka that; "it shows very clearly that I want to continue here".

"We've had good dialogue, positive conversations," he said. "I know what the situation is, more or less. I've given them more time to get things sorted. That's what I wanted to signal, to say I'm willing to wait.

"I've given them two weeks and hopefully there will be a decision by those two weeks," he continued. "I understand the situation. It's very clear that I believe this team will go very far and I hope I can continue here for a long time.

"It's hard to know what's going on sometimes," he admitted, "but as ever Formula One is a commercial sport and it's no secret that my commercial value is a bit lower than perhaps other drivers. I have very good partnerships and sponsors, and I'm very grateful for their support, but some of the other drivers have an unbelievable amount of support. Hopefully the decision will be taken from talent and not from money."

The French team arrives in Japan buoyed by the fact that it has scored a point in both of the last two races.

"Everyone is excited because you can see we're improving on a car that actually isn't really developing," he said. "We're getting more out of it, learning more, getting procedures right, pit stops are getting faster, strategies are starting to be very good. There's a lot of stuff in place that when we get a fast car I feel comfortable we should be able to extract everything out of it. It's very encouraging."