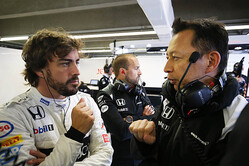 Honda has given the all-clear for Fernando Alonso to race its latest upgrade at its home race in Suzuka this weekend.

The upgraded unit, which saw the Japanese manufacturer use two of its remaining three tokens, and features a revised exhaust and lighter engine block, was used during the Friday practice sessions last week. Indeed, in order to get two of the new units into his engine 'pool' for the remaining races the Spaniard took a 45-place grid penalty consigning him to the back of the grid.

Keen to have the new unit available for its home race this weekend, having run the new unit on Friday, Honda removed the engine after Friday’s running and conducted a thorough analysis before giving the all-clear for this weekend.

However, mindful that this is its home race, and not wanting to see one of its units incur a grid penalty, Honda has opted to delay giving Jenson Button the new unit until Austin, though the Briton will have the revised exhaust.