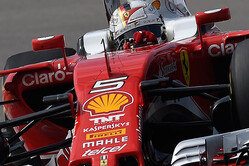 Sebastian Vettel has admitted he was wrong to question his team tyre strategy.

In the closing stages of yesterday's German Grand Prix, Sebastian Vettel was told to pit for fresh rubber. However, the German asked to do another couple of laps, insisting that his tyres still felt good.

"The only way to undercut is to box now," the German was told.

"Who are we going to undercut," he demanded.

Following a brief period when no words were spoken but you could almost hear the thought process, the German was told: "OK, stay out, stay out."

Asked about the incident after the race, in which he finished fifth, around 17s behind Nico Rosberg, and whether his questioning of the team's strategy was a sign of him exerting his authority in the wake of James Allison's departure, Vettel said: "During the race I am talking quite as lot with the team, about strategy, about what's going on with the tyres, stuff like that.

"I don't know how much got broadcast," he continued, "but it was a long discussion for many, many laps and in the end we decided to stay out.

"Arguably it was a bit my fault that I drove it that way so that we... I gave away the opportunity to put the people in front under pressure but we were really struggling at the end of the stint with the tyres, so we need to see if I could have done a better job."

Despite having fallen behind Red Bull in the standings, the German insists that all is not lost.

"The last couple of races have been tough for us, but very, very useful, as we understood a lot about our car and we know what to focus on. It wasn't entirely clear after the first couple of races but it has become more and more evident.

"Obviously it's a harsh way to find out," he admitted, "not being as competitive as we want to, but I think we know what to do. It's not easy to change overnight but there is a plan and the second half should be stronger in that regard."

Referring to Red Bull, he said: The last couple of races have been tougher for us and better for them, but I'm sure the second half will be better for us again and we'll be more competitive."