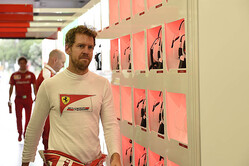 Maurizio Arrivabene: While one week ago, in Hungary, our race pace was totally respectable, here in Hockenheim we experienced again some issues with both mechanical grip and downforce, which unfortunately are not unknown to us. Obviously, we must react as quickly as possible to cure these problems and most of all we must lose not to too much time in the process. Having been jumped in the Constructors' championship only pushes us to react, and perform better in the second part of the season, after the summer break.

Kimi Raikkonen: It was a very quiet and boring race, nothing much happened. At the start I had some wheelspin and lost one position on Sebastian. With new tires the car felt pretty ok but then I was starting having understeer and oversteer, as basically we lacked grip. In the last stint we had to do fuel saving so there was not much to do. Obviously we have to improve the car in all areas, if we add downforce it will definitively help us. We all want to do better and it's painful to see that we are not where we want to be, but I believe in the team. We need some time and hard work and we'll get there. It's important for us to find improvements and work as a group.

Sebastian Vettel: We're usually faster in the race than we are in qualifying, but this wasn't the case today: we were sliding around too much and this affected the tires as well. Fifth and sixth place was the best we could do but we obviously can't accept that, we will be working to improve and we know what to do, the stuff that's coming up for the next races has always been part of our plan. The first part of the season didn't go as we wanted, we need to work on ourselves and I, for one, had too many ups and downs which cost me some points. But we'll keep fighting. As for today's race, the decision to fit Softs in the end was a pretty straightforward one, as we had a new set available. I decided to stay out for some more laps as I did not want to go too long with the last set, with hindsight it was probably a too conservative choice as we would have had a chance to put some pressure on the car ahead. The atmosphere today, with all the German and the Ferrari flags, was incredible and from this point of view it was my best home Grand Prix ever!