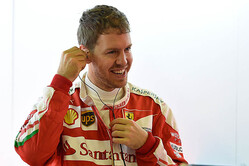 Maurizio Arrivabene: "Today we saw a great reaction from the whole team. Once again, we were able to show that we never give up. Our drivers did an outstanding race really giving their best and, if Seb could have benefited from a better starting position, the final result would surely have been different. As for Kimi, he showed that he fully deserved his contract to be extended into next year. Having said that, when you don't reach the podium you can't be satisfied, and indeed we aren't: but this does not mean that we are not ready to take the fight to the end."

Kimi Raikkonen: "Today my car was really good and behaving well, we had the speed, but obviously this is not the easiest place to overtake. Unfortunately, after yesterday's qualifying, today we were not in a position that would allow us to get the result we deserved, and this is the most disappointing thing. Regarding the battle with Max, it's not for me to decide but I think that his maneuvers are questionable. The first time he started to move on the right and I went left, but he moved back there too, so I had to try and get out of it because I was hitting him hard on the rear and I lost my front wing, which didn't make it easier to attack again. Then later, every time I managed to make a move and I was committed to somewhere he decided to turn afterwards, and at that point I had nowhere to go. It's not my job to determine if he was correct or not, but I have seen people being penalized for much less. Today we did our maximum, I'm disappointed because I couldn't get past Verstappen and go catch the rest."

Sebastian Vettel: "I was hoping for more today. I had a good start, maybe too good, because the run into Turn 1 is very long, so I had to get out of the tow a bit too early. It was bit of a shame because I was stuck in fifth position from then onwards. Then I knew everything would have to go through strategy and pitstops and so we overcut Verstappen. We were much stronger at the end of the race, maybe a couple of tenths, but unfortunately not quick enough to pass. If I had been able to, I would have done more, but I tried everything until the end, we were on a good strategy, we had more pace at the end but as I said this is one of the most difficult tracks for overtaking. With a better position yesterday, I think we could have finished P3 without any problem. We are not happy to finish fourth, because we have to win, we need to improve here and there, but I think the difference with Mercedes is not that big as it looks. They seem to be better managing their tires and that makes for a big gap over a number of laps."