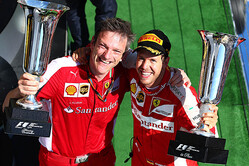 In many ways, the sort of frenzy the British media is able to whip up - on virtually any given topic - is nothing compared to how its Italian colleagues play the masses.

Be it politics or football, the Italian media leads the way when it comes to calling for sackings and resignations.

And then there's Ferrari.

As far as the Italian media is concerned, the legendary team from Maranello is Italy, and when it isn't doing well - especially following failure by the national football team - it puts the country in a bad light.

Consequently, as Ferrari loses further ground to Mercedes and falls into the clutches of Red Bull, the media is on the case, claiming the team is in crisis.

Aware that another major cull could be in the pipeline, and following a number of high profile strategic mistakes and technical failures, Maurizio Arrivabene admits that next weekend's race in Hungary - where the team scored a convincing win last year - is crucial.

"After Hungary we cannot fool around any more," said the Italian, according to Motorsport.com. "After that, we will understand what chances there are and where we are... and I believe that we cannot fail.

"Earlier in the season we had some problems related to certain components of the power unit," he continued, "and these were sorted to the point that today our strong point is the engine. Now we need to work on reliability and other areas such as the aerodynamics.

"This race highlighted problems that are not only related to this track," he admitted, referring to the British Grand Prix. "They had already emerged in Barcelona and in Baku, but here were more visible.

"We have to work fast, but there are clear gaps. Apart from the gearbox problem that needs thorough analysis to figure out if it's a design problem or materials. I'll bet on the latter."

Referring to the aerodynamics issues, he admitted: "At this stage of the season, you cannot have revolutionary solutions. But it becomes a priority to solve the problems we have to improve the car balance, and in this there should be some updates.

"I believe the progress Red Bull has made is good for F1," he concluded, "because they have helped create more interest and a better show. But I still think that our goal is to counter the Mercedes and not Red Bull."