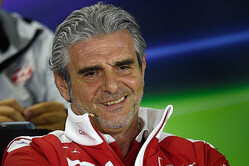 With an 81 point deficit to Mercedes, little wonder that when Sergio Marchionne said at the weekend that the "championship is still open", the widespread reaction was 'I'll have whatever he's on', such was the disbelief with which his claim was met.

Subsequently, speaking at the FIA's Sport Conference Week in Turin, Sebastian Vettel insisted that the car has great potential, which appeared to support Marchionne's claim that the SF16-H is a "work in progress".

"I think the engine, the power unit, is there," he told Sky Sports F1, "if we can get the rest of it right this machine is going to be a hell of a thing to beat."

Could Vettel and Marchionne know some we don't?

Maurizio Arrivabene has said that there are surprising updates to the car on the way, but wasn't willing to say when they will appear.

"I won't tell you the exact dates, but I can tell you that our engineers do not sleep," he said, according to Motorsport.com.

"Some surprises will come," he added, "because our chassis engineers are sleeping even less."

With just three tokens available for the remainder of the season, following its Montreal upgrade, it would appear that most of the "surprises" will comes from the chassis as opposed to the power unit.

Echoing Marchionne's claim, Arrivabene believes the title is still open, indeed, the Italian thinks the in-team rivals between Lewis Hamilton and Nico Rosberg at Mercedes will play to the Maranello outfit's advantage.

"We must take into account that Rosberg and Hamilton will take points from each other, because otherwise it would be tough," he said. "The championship is long and we have had several unfortunate days, while they have had only one bad occasion.

"But if it happens then it is very easy to climb up the points table. We have to believe and have to be positive.

"In Canada we were not far from Mercedes," he continued. "In Baku, we looked to be in bad shape but then we got on the podium. To me it would be fine to win the title with one win, just as Keke Rosberg did."

Asked if Hamilton might therefore be considered an ally, as Ferrari chases down Rosberg, the Italian admitted: "Why not? The perfect thing would be that first he is an ally, but then of course he will become the main opponent. There are still thirteen races to go, the season is still very long."