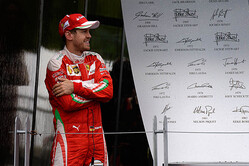 Kimi Raikkonen: It hasn't been an easy weekend, we tried to make the maximum out of that, but obviously we cannot be satisfied with the result. The behavior of the car was pretty ok in certain parts of the track, but in some others, with the cool conditions, I was struggling with the tires. When I was free to push it felt good, but then when I had to slow down for fuel saving the tires were losing temperature, they were cooling down and it was difficult to make them work again, and this went on for most of the race. Now I don't know what to expect for the next weekend, I've only seen the layout of the Baku track in the simulator but I'm sure it will be a tricky circuit, it's nice to go to a new place.

Sebastian Vettel: Today it was a great race, I enjoyed every single lap and it's just a shame that the trophy is not as big as it could have been. There's no reason to give the team any criticism for the strategy: when I pitted for the first time we thought it would be quicker, so I was happy to come in. We expected obviously the tires to last a little bit less, but they didn't. The good news is the car is working, we had a normal Saturday, which allowed us to have a great race. I had a perfect start, I reacted well to the light going off, I did not look at the others and only focused on myself and was able to fly past and by turn 1 it was done. I was very happy to be in the lead and push properly and then probably in the last corner I pushed a bit too much. Of course I would have loved to hit more than 1 or 2 tenths per lap, maybe 3, maybe 7 tenths for lap, but I think it was a great race and you should not get overexcited with strategy. In my point of view, I know that we have the best people in terms of strategy. I know that this car is a step forward, we know also that there's still potential, and we're not yet where we want to be. I also think we put ourselves under enormous pressure because we want to win. As a team, we came here and did our best, this weekend we were very close and hopefully next week we'll be there.

Maurizio Arrivabene: Today, Sebastian had a stunning start and a great race, showing that this cars has muscle. Kimi suffered perhaps a bit too much when he was on fuel saving mode, losing temperature in his tires in the process and struggling to recover. As far as race strategies are concerned, we tried to take advantage of the Virtual Safety car period, which lasted way less than expected. It could have proved a very good move, taking into account the predicted rate of degradation on the Ultrasoft tires: but this degradation did not materialize in the end. Nevertheless, I am happy for Seb's second place in the race, mostly on account of the committment from the whole team after Monaco. Now we must keep working with humility but even more determination, and finally aim for wins.