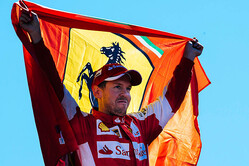 Speaking at the FIA's Sport Conference Week in Turin, which this year has focused on "A passion for speed – how the heritage of motorsport can shape its future", four-time world champion Sebastian Vettel shared his thoughts on the perfect ingredients to maintain F1 as the pinnacle of motorsport.

"What fascinated me as a child was the speed," he replied, when asked, going forward, how the sport can learn from its past and shape its future. "I think racing should keep its core pillars, and speed is one of the essentials.

"The passion for speed, you either have it or you don't... it's a shame really, he broke off, to sit here and try to explain how it feels to drive one of those cars, the best thing would be to invite you all and have a go.

"The sensation of the speed, the cornering speed, is incredible," he continued. "That has remained one of the main pillars throughout.

"Speaking to drivers like Sir Stirling Moss, at that time, his was the best Formula One car you could drive, the most exciting.

"To some extent the ingredient of danger," he continued, "because that's also what makes it exciting. Coming from Baku last week, the circuit got a lot of criticism for being too dangerous, I disagree. I think the FIA and the people in Baku have done a hell of a job fitting that race track in a place where, arguably, it's not made for racing but it's fantastic, it's spectacular, there's little room for error and that's what makes it so exciting. That's what made it exciting in the past and what still makes it exciting.

"Equally, the cars have become a lot safer, which is a lot nicer for us, knowing a little bit of the history, reading a bit, not being a complete specialist; many years ago drivers weren't as lucky, the cars weren't as safe as they are now, I think you need to find the right compromise.

"So the ingredients for passion, speed, danger, noise, is very important, equally we want to make the sport safer, we can't shut our eyes if bad things happen, we need to react and I think we have in recent years and we still do now."

The German revealed that his passion for racing was there before her began karting.

"The fact that my father used to do some amateur hillclimb racing, brought me very close to motorsport at a very early age," he told the conference. "The whole family was travelling together to the various races. So we were involved, and as soon as i was stable enough, with walking, at the age of three - three-and-a-half, by some coincidence the next Christmas I had a go-kart. It was under the tree waiting for me, that's how I started.

"My father was a massive fan of Formula One, first Senna and then Michael Schumacher, so we started out, not having any real idea. My first race, I was seven years old, and from then on it was step by step, go-karts and later the cars. They got bigger and bigger."

A real fan of the sport even away from the cockpit, the German, who is highly knowledgeable about its history, was asked its essential appeal.

"The word has been mentioned many, many times," he replied. "It's the passion. The passion for speed, the passion for competition, to measure yourself against others. To make a point in trying to be the best, that's what it's all about.

"You have it or you don't," he continued. "The speed, the excitement, when you drive one of these cars is incomparable. It's what drives me."

Asked about the problems facing those trying to get on to the racing 'ladder', Vettel admitted it is "very, very difficult".

"When I was 8, 10, 12 years old I was go-karting, trying to go flat-out, to race as hard as I could. But the moment I stopped I was playing in the dirt with toy cars with the other drivers, so that was a very nice time.

"But at some point it started to be a bit more serious than that," he admitted. "You needed to have support, you needed to have the money, through sponsors and sponsorship so it was very tricky.

"Also, as a young boy, to experience that, when all you want to do is race, when you don't really care how the bills get paid... for sure, the racing world is a world where you mature very early because you have a lot of interactions with adults, and racing, in that regard, becomes very, very serious at an early point in your life.

"So I am very grateful that I had people looking after me, initially, and then later we had the support of Red Bull and BMW. Those opening stages of my career were crucial, otherwise it's impossible if you don't have people willing to help, willing to give you that support, willing to pay your bills. It's very difficult to climb up the ladder."

As the sport becomes ever more technical, he was asked about the good things that have come out of this new era of F1.

"I think the best thing is that the cars are very quick," he replied. "If you look where the cars were ten years ago, twenty years ago, thirty, forty, fifty years ago, and where they are now, obviously the technology has allowed the cars to get a lot quicker, which is obviously more exciting to drive.

"The feeling, the sensation you get, is incredible, but on top of that, in terms of safety, we've learned very, very much through the experiences, good and bad, in the past and we've been able to improve the formula, working very hard on the race tracks and the modern technologies allow us to come up with the best package we've ever had."