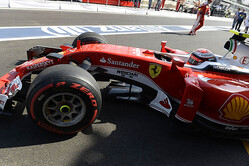 Kimi Raikkonen’s goes from bad to worse as he is handed two penalty points.

"The driver crossed the white line separating the pit entry with all four wheels and did not enter the pit lane, as required in the Race Director’s Event Notes," was the official explanation, as race stewards revealed the Ferrari driver had been hit not only with a 5s time penalty that cost him a podium finish but 2 penalty points, bringing his total for the twelve month period to 5.

"I understand the rule of crossing the line, but it's stupid, you gain zero from that," said the Finn following a difficult race. "Unfortunately I got the penalty."

Aside from an technical issue for which he was unable to elicit any assistance from his team courtesy of the ban on radio comms, the Finn's afternoon was further frustrated by backmarkers, plastic bags and even his own teammate.

Having yielded to Sebastian Vettel, the team thanked the Finn.

"Now you tell him to push, I don't want him in front of me" barked Raikkonen, aware of his time penalty and not wanting to lose out to Perez.

In the final stages, under pressure from the Force India driver, the Finn demanded that action be taken in terms of backmarkers.

"The aim was to keep the five seconds to the next ones," he said, "but twice I ended up following one Sauber and one Haas for more than a lap, and lost a lot of lap time. The same guy who gives you the penalty should give the blue flags.

"That was the start of the small issues," he concluded, "but the speed was more or less there. Overall I'm a bit disappointed. It was a difficult weekend, not a lot of fun. But it wasn't a disaster."