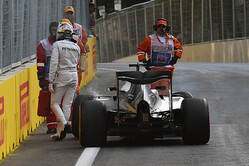 Lewis Hamilton is to be given a replacement set of tyres for the start of today's Grand Prix of Europe.

The Mercedes driver, who crashed out of Q3 and ended up qualifying tenth, flat-spotted his tyres in another incident in Q2, these being the tyres with which he was supposed to start the race.

However, article 24.4g of the Sporting Regulations states that: "Any such tyres damaged during Q2 will be inspected by the FIA technical delegate who will decide, at his absolute discretion, whether any may be replaced and, if so, which tyres they should be replaced with."

Earlier this morning, the tyres were inspected and approval for the change was duly given.

The tyres given to Hamilton will have had to have covered near identical mileage, though it is not entirely clear where they will come from.

While the world champion has used his three sets of supersofts available for the race, teammate Nico Rosberg, who starts from pole, still has a brand new set of the red-banded tyres.