Ecclestone: If you don't want to drive... go home 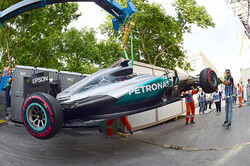 Following Lewis Hamilton's suggestion that drivers complaining about safety at the Baku City Circuit should "stop moaning", his good friend Bernie Ecclestone has gone one step further, suggesting that if drivers are unhappy they should go home.

Following numerous incidents on Friday, including the postponement of the original GP2 qualifying session, a number of changes were made to the circuit overnight.

This included the removal of kerbing at certain corners and replacing the kerbing with painted markings. This followed the loosening of bolts supposed to keep the temporary) kerbing in place, which in turn led to (rear) tyre damage on almost all the F1 cars.

Changes were also made to the pit entrance after drivers complained that it was too tight and also badly signed.

Saturday's GP2 feature race had to be re-started after a five-car clash brought the race to a standstill, with less than half the field eventually finishing.

Following numerous incident in the F1 sessions, not least Hamilton qualifying tenth after a series of errors and eventually clouting the wall, many are expecting carnage on Sunday.

Ecclestone however, has no time for the moaners, urging that if they don't like it they can head home.

"If they don't want to drive they don't have to," he told reporters. "It's up to them, if they don't like it then they can go home.

"This is a ballsy circuit, and that's it," he continued. "One of them, I think Nico Rosberg, was complaining about the speed into the pitlane. So I said go and have a look and see if he's got brakes on the car, because it's up to them to decide what speeds they enter."