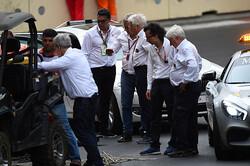 Following issues that arose during today's F1 and GP2 sessions a number of changes are to be made overnight.

This morning's GP2 qualifying session was abandoned after just a few minutes when it was discovered that the majority of left-rear tyres on the F1 cars had been damaged in the opening practice session. The damage was the result of bolts that had been used to keep the (temporary) kerbing in place at Turns 6 and 12.

Though Pirelli was keen to point out that cuts on the tyres didn't lead to any air loss, the situation was serious enough that GP2 qualifying was postponed until after FP2 and during that session drivers were warned to avoid the kerbing at the exit of Turn 6 which was shown to be loose.

Following tonight’s driver briefing, at which this and a number of other issues were raised, the FIA has instructed that the offending kerbs at 6 and 12 be replaced overnight and paint be used to mark out the track limit. Work will also be carried out on the section between Turns 12 and 15, with particular attention to Turn 13.

At the same time, the line marking out the pitlane entrance is to be moved back and to the left after drivers complained that undulations on the final straight made it almost impossible to see the line marking the pit entrance. A new pit entry sign will also be put in place.

As a further precaution, drivers are forbidden from crossing the line be it during the race or during FP3 or qualifying, thus ruling out any last minute decisions to pit or indeed abort a stop.

The kerb at the exit of the pitlane is also to be removed and replaced with paint.