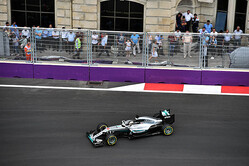 No sooner had the 'circus' pitched tent in Baku, than a number of drivers were raising concerns over safety.

To be fair, following incidents which saw loose kerbing and tyres damaged by bolts holding said kerbs in place, the FIA has carried out work over night to address them. Another cause for concern, the pitlane entrance has also been addressed.

However, whilst rivals were admitting fears over the circuit, pace-setter Lewis Hamilton was saying how much he loves it.

"It has a combination of corners like Monaco and you really have to commit to corners with barriers on the exit, which is really tricky," he told reporters. "I had my heart in my mouth. It is a real challenge to be on the limit.

"Configuration-wise, it is not massively challenging," he continued. "But it is like a big balls track, just like Monaco.

“We are doing 220mph down the main straight, 200mph down some of the others. Turn one you can dive out and go straight on. But turn three, once you commit to the corner, if you don't make it, you're in the wall. So you really need your confidence."

Turning his attention to the pit entry, which has been questioned by a number of drivers including teammate Nico Rosberg, the Briton said: "It is really bumpy down the straight and you can't really see turn one that well and it's really hard, but that's part of racing.

"These drivers they moan so much about so many things," he concluded. I guarantee you, these guys they want it to be smooth, smoother than ever, no vibrations and no bumps. They want to take all the character out of these tracks."