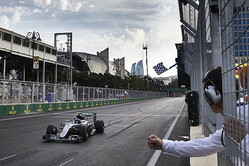 Whilst we usually rely on the weather gods to provide the uncertainty the fate of today's race lies elsewhere. Be it Bernie Ecclestone, Charlie Whiting, Hermann Tilke, the FIA or the Baku authorities, the fact is that a lot of people will be holding their breath at the start, hoping that we can get through the following 51 laps without incident.

Of course, based on the evidence thus far that seems highly unlikely. Other than the many incidents in every session, including world champion Lewis Hamilton clouting the wall in Q3 yesterday, both GP2 races have required re-starts.

Indeed, looking at the GP2, and, to a certain extent, the F1, the Baku city circuit appears to bring out the worst in drivers.

Normally, will a frustrated Hamilton starting from tenth we would relish the Briton's fight back. However, today we will be glad simply to see the Mercedes driver and his colleagues simply make it to the flag.

If we sound cautious, indeed nervous, it's because we are. From the moment the first picture of this circuit began to emerge, depicting its narrowness, the close proximity of the walls, the smooth dusty surface and the high speeds, we were concerned, and nothing we have seen since has eased those fears.

However, as Mike Lawrence keeps on reminding us, F1's mantra is 'follow the money', and as Bernie Ecclestone told the drivers, 'if you don't like it, go home'.

Consequently today's race is either going to be remembered for its carnage or its classic racing. Either we are going to see a number of re-starts and just a handful of finishers or a couple of drivers are going to rise to the occasion and deliver performances of epic proportions, in the mould of Senna at Donington.

Having seen (allowed) his championship lead to drop to 9 points, today is Nico Rosberg's opportunity to rebuild some of his previous advantage. After two woeful performances in Monaco and Canada the German certainly needs to deliver something worthwhile today if we are to continue taking him seriously.

Sadly, the grid penalty incurred by Sergio Perez following his late crash in FP3, necessitating a new gearbox, means the Mexican will not start from the front row, though we still expect to see him leave here with a decent points haul.

Against all odds Daniel Ricciardo took third on the grid, even though the slot appeared to be reserved for one of the several Mercedes powered cars. With teammate Max Verstappen starting from ninth, the Australian has a real chance to grab the spotlight today.

Starting fourth and fifth must be a lot better than Ferrari had hoped for, though there are doubts as to the reliability of the car. If nothing else, a good result might stop the Italian rumour mill.

Massa starts a well-earned sixth ahead of Daniil Kvyat, a driver whose weekend suddenly sprang to life in qualifying, a driver who really needs a result.

And then we have Valtteri Bottas and Max Verstappen, who have been engaged in a war of words since yesterday's qualifying session in a couple of incidents that were questionable.

And as if that isn't enough, we then have Lewis, who heads Hulkenberg, Grosjean and the rest.

Late gearbox changes see Carlos Sainz and Kevin Magnussen incur penalties, the Spaniard dropping to 18th whilst the Dane will start from the pitlane,

Honestly, this is a race in which anything can, and probably will, happen. Whilst we might well see the same three drivers on the podium that we saw in yesterday's post qualifying press conference, we could just as easily see a Manor driver up there along with a Sauber pilot.

This is one race that will not be won at the first corner, but can be decided.

Tyre options are supersoft, soft and medium. A one-stop seems to be the best option. The top 10 will all start on used supersoft, and we would expect them to move onto the soft on lap 22.

If starting on the soft, the time to switch to supersoft is lap 29. However, strategies will have to be flexible, as there appears to be a high likelihood of a safety car.

Whilst the GP2 races showed us the various negatives, it also gave us some great overtakes, courtesy not only of DRS but slipstreaming, something we have already seen a number of F1 drivers take advantage of here this weekend.

The pitlane opens and one by one the drivers head out, among the first is Lewis Hamilton.

The drivers gather for the Azerbaijan national anthem, one of the better ones, only Hamilton opts for a sun shade.

All are starting on the supersoft, bar Hulkenberg, Wehrlein and Ericsson who have opted for the soft.

The field heads off on the warm-up lap, a great cloud of tyre smoke fills the air.

They're away. Strong starts from Rosberg and Ricciardo, the German moving across to cover the charging Australian. Behind, Massa locks-up heavily into T1, allowing Perez through, whilst there's a little bit of argy-bargy at the rear involving Gutierrez and Haryanto as Palmer goes wide. A good start for Verstappen also.

It's all very cautious for much of the first lap, though Kvyat is giving Massa a hard time.

Bottas, who had a poor start, passes Kvyat for eighth in T3 having previously been thwarted at T1. The field continues to tread very carefully.

Hamilton also passes Kvyat as the Briton moves up to ninth, with Grosjean following through moments later as the Russian struggles with the Toro Rosso.

Bottas and Verstappen renew their qualifying battle, with the Finn giving the Red Bull driver a hard time

Now Hamilton closes on Verstappen also with Grosjean also closing in. Bottas passes the Red Bull as Hamilton loos to try and pass on the other side. The Briton nails the Red Bull driver.

Perez is putting pressure on Raikkonen, he makes a move but fails and loses ground.

At the end of lap 5, Verstappen is the first driver to make a tyre stop, Alonso pits also.

Out front, Rosberg enjoys an 8.3s advantage over Vettel who is 2.8s ahead of Ricciardo.

Ricciardo stops at the ends of lap 6, as do Button and Magnussen. The Australian rejoins in 13th.

"There is ****** plastic flying around, I'm trying to avoid it," complains Raikkonen, referring to plastic bags that are on the track.

Kvyat's race is over, the Russian's car pushed back into its garage.