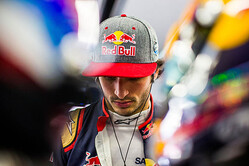 Carlos Sainz has been handed a 5-spot grid penalty following a gearbox change.

The Spaniard hit the Wall of Champions in Q2, bringing out the red flag, and though 16th on the timesheets, moved up one position as a result of the grid penalty handed to teammate Daniil Kvyat for his silliness in Monaco.

Although initial inspection of Sainz' gearbox suggested it was OK, the team subsequently opted to change the unit for today’s race.

As it was replaced before six consecutive events had expired, a breach of Article 23.6 a) of the Sporting Regulations, the driver took the 5-place hit.