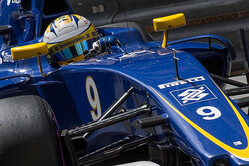 The Sauber F1 Team finished qualifying ahead of the Canadian Grand Prix on the Circuit Gilles Villeneuve in Montreal in P19 (Marcus Ericsson) and P20 (Felipe Nasr). Ericsson will have a three place grid penalty for 'causing a collision' during the Monaco Grand Prix.

Marcus Ericsson: "It was a tough qualifying. My first run was ok. For the second run we went out a bit later than the other teams. When I was out on track, the rain started to fall a bit more towards the end of the lap, so it was more and more slippery. It was not the easiest session. Regarding tomorrow, I think the unstable weather conditions could mix things up during the race. As we start from the back of the field, that could give us some chances."

Felipe Nasr: "It was a tricky qualifying. In general I struggled a lot with the grip, even compared to the FP3 morning session. I never managed to get everything together in qualifying. I think I went out a bit later than the others. In the end I was not able to improve on the second run on fresh tyres due to the light rain. For the race, I believe the weather will play a huge role. We have to remain positive for tomorrow and see what opportunities might come up for us."