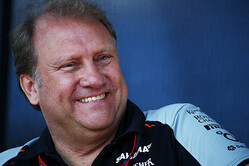 Force India and Sauber have written to the FIA and Bernie Ecclestone voicing their concerns over the new engine rules.

The pair, who have already lodged a complaint with the EU Competition Commission over the governance of the sport and how the prize money is divided, are concerned that the new engine rules do not give enough help to smaller teams. Again, in terms of how the sport is run, the pair are unhappy with the process that led to the new rules being agreed.

Having met with Bernie Ecclestone and Jean Todt in Barcelona, the two teams have now sent a joint-letter to the F1 supremo and FIA president voicing their concerns.

"A letter was sent to the FIA and the commercial rights holder, putting our position to them," Force India deputy team principal Bob Fernley told Motorsport.com. "I'm not going to deny that we sent it, but I'm not going to comment on it either."

Referring to the EU Competition Commission, he added: "The EU has slightly restructured because of the pressures that the competition department are under.

"The sports complaints or enquiries have been put into one division. Because it's been moved, it has to go through process again - in other words, people have to get up to speed and so on. Once they are ready, they will advise us.

"From our point of view, we can only work with the process that's available to us, and obviously we'd like to see the EU investigating, because clearly we need an independent body that has the power to make changes if necessary, and should they feel our complaint reasonable."

Of Ecclestone, who insists he welcomes an EU investigation, Fernley said: "In all fairness, Bernie has dealt with this in a professional manner. He knows we're not happy and he respects our position, and I think it's a case now of it just going through the process."