Sauber: We win together, we lose together 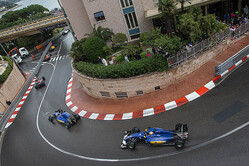 Following in the tyre tracks of Mercedes, which addressed its fans in the wake of Lewis Hamilton's issue in Sochi, Sauber has written an open letter to its fans following last weekend's fiasco in Monaco.

With Marcus Ericsson running behind teammate Felipe Nasr, the Hinwil team called on its Brazilian driver to allow his faster teammate through. Whilst Nasr argued the call, Ericsson took matter into his own hands, subsequently making a foolish move on his teammate at Rascasse which was to eliminate both drivers.

Sauber has addressed its fans not only to address the clash involving its drivers but to explain the thinking behind asking Nasr to yield.

"There has been a lot of talk and speculation about what happened in Monaco this past weekend and we, as a team, understand your frustration... we really do! Seeing our two cars in pieces in Rascasse was disappointing, to say the least. And there has also been a lot of blame thrown around between the Felipe and Marcus camps of fans with just as many questions regarding whether the team order should have been given in the first place. We would like to address these concerns.

What happened is unacceptable. The commentators of German broadcaster RTL put it like this: The crash was Marcus' fault as he caused it with a risky manoeuvre. And it was Felipe's responsibility as he should have listened to the team and shouldn't have closed the door on his teammate.

We all know football (or soccer, for our American friends). Right, F1 is not football but here's an analogy which we hope will help to understand our point of view. Can we all agree that in football, what counts is the best possible result for the club... for the team? It doesn't really matter who scores: as long as the team wins, everyone wins.

Where does that leave us? Simple. We win together, we lose together.

Many of you argue that team orders aren't good for the sport and that we should just let our drivers race freely. We agree, but while this is true most of the time and it is what we do as much as possible, it is imperative to always look at the bigger picture and ask: 'What is better for the team?'

Some of you have said that you don't understand why we even bothered to give a team order running in positions 15 and 16. Well, with every position gained, we are that much closer to points. And even without scoring any points, any higher position in a race can potentially mean keeping the position in the Constructors' Championship (or, vice versa, a drop in positions).

We are all racers. But the team's overall interest will always be more important than that of any individual.

Remember the days when team orders were given in secret codes and the fans didn't have a clue about what was going on? We very much prefer today's open communication.

As emotions run high after this incident, it is important to remember that without the team, the drivers couldn't prove their racing skills and without the drivers, the team wouldn't be able to compete. Support "your" driver by actually giving him support. Cheer for Felipe, Brazil. Cheer for Marcus, Sweden. But please do so with respect. We are all Formula 1 supporters after all.

We have analysed what happened; we have discussed it with Marcus and Felipe, and we all agree that this must never happen again. Everyone at the factory in Hinwil, as well as the drivers, now focus on the next race in Montreal. We're all looking forward to racing soon again, as a team.

We'd like to thank all of you who support our team and our drivers. We share your passion and we appreciate your commitment and engagement! And we thank each and every member of this team who is still giving it their very best on a daily basis during these trying times. Sacrificing for a shared dream is what keeps us going.