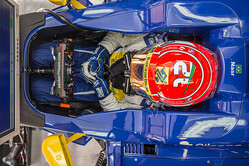 Although there is no doubt that Formula One, as ever, has adapted to its latest challenge, the introduction of hybrid technology in 2014, many believe that other technical aspects of the sport have been stifled, be it because of money or the need to maintain the status quo.

Whereas the sport was once admired for its engineering and technical prowess, in recent years it has appeared to frown on ingenuity, any genuine innovation seemingly banned at the first (or second) opportunity.

Sauber boss, Monisha Kaltenborn, believes that in this respect the sport has lost its way.

"You have to make sure of is that the engineering challenge that Formula One should be is there," she told the official F1 website. "That is what made the sport not too many years ago very exciting.

"There must be things where you can show how much smarter you are than the rest - and the constructor definition gave you not only the obligation, but also a certain degree of liberty to grow your own ideas. Now most things are already determined - like the power unit. So many things are given already, so the areas where you can have your own innovative approach and the engineering challenge are already less. In the end there is no easy recipe and no straight line to draw.

"I think we have to bring back that engineering challenge," she admitted. "Looking at the bigger picture, there are many ways to bring the field closer together - and that is what the sport needs. One thing is the financial side - looking at the costs and looking at the income distribution - but you also must not neglect the technical side. If you would allow certain things to be done again - or give more freedom in certain areas, under certain given restrictions - then even smaller teams could maybe come up with ideas that are not a question of money but a question of smartness. That is what we have seen in the past."

Unsurprisingly, she has a strong opinion on newcomer Haas, which like Sauber uses the Ferrari power unit. Although she admits the American outfit has done a "very remarkable job", she feels the team is not a constructor in the purist sense.

"They are doing a good job," she admits, "a very remarkable job. At the same time whatever one knows about it from the outside, there are certain ways which we don’t think are the right way. We believe that it is essential for Formula One that a team turns up as a constructor. You could argue about what that exactly is, but I think that some things should be done on one’s own that makes Formula One."