Sauber's issues not all about the car 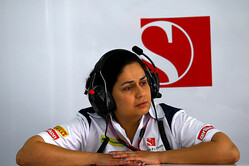 Having finished tenth in the 2014 standings and eighth in 2015, after five rounds of this year's championship things don't look to be getting better for Sauber any time soon.

Of course, the Swiss team's much publicised financial issues don't help, but Monisha Kaltenborn insists that the issue is not all about the C35.

"No, it is not all in the car," she told the official F1 website. "It is a mix of all. Our engine supplier has done a good job, but they themselves have to see where they are standing compared to the other engine manufacturers at the moment. They also have a way to go.

"And looking at our car from the chassis side, we do not yet have all the updates that we want to bring. That will take a bit of time until that comes in... then you will see the real potential of that car."

Asked about claims by both Marcus Ericsson and Felipe Nasr that on certain tracks the car is "undriveable", she said: "If you talk about driver comments, my guess is that there are many drivers out there who have reasons to complain about their car.

"Right now we are working on the front wing. Things will also be coming up on the rear wing. So there are things to come. But you also have to consider the balance between this year’s and next year’s car. We don’t want to be caught again in a situation where as a strategy you put a lot more effort into the current car and have a bit gap the next year. But there is no reason for us to give up on 2016!"

Along with Force India, Sauber has written to the FIA and Bernie Ecclestone regarding the new engine rules, having already submitted a complaint to the EU Competition Commission over the governance of the sport and how the prize money is divided, with that in mind how does Kaltenborn feel about the new technical rules for 2017 which, due to their late agreement, must favour the bigger, wealthier teams.

"It was very late," she agrees. "And of course smaller teams face bigger challenges than bigger teams, unless you have already been speculating and having done things before the rules were passed…

"It was a hasty move," she continues. "The whole thing was triggered by the wish to make the show better. And that is rightly important to the commercial rights holder, as it is the show that’s lacking not the sport, as the sport is an excellent platform.

"So if I come back to the things that were implemented, I do not see exactly what they are supposed to be doing - but let’s wait and see. It would be completely the wrong approach to trash something already before it has even started. But we also should not be so naive as to think that it will solve all problems. We can live with them - and I would even go so far as to say we should have put more stability in it by making these changes valid longer."

Asked about the team's financial situation, which has led to all manner of rumours including talk of a deal that would see the Swiss outfit run as Alfa-Romeo, she is giving nothing away.

"As a team principal, I do not discuss financial affairs in public and I will not change that. Life is not easy - that is true - and like any other team we are facing quite severe challenges. But we are working hard on solutions, which is the most important thing, and we hope to resolve the situation soon.

"I cannot give any specific time - but, of course, for us it has to be as quick as possible," she admits. "Of course that would also help other teams who are also in difficult conditions, as we are not the only one. We need to work in surroundings that are a bit more favourable towards private teams."