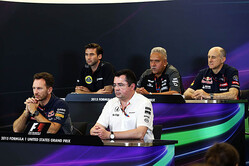 Christian, we'll begin with you. First of all, what's the… you're smiling?
Christian Horner: I'm just very upset to hear Toto is ill and couldn't make it, that his helicopter couldn't fly unfortunately. Anyway, I wish him well and hope he's OK. I'm sure there will be no fine, obviously. It should be about 100 million, apparently.

Daniel Ricciardo was here with us yesterday, talking about the update Renault engine. What's your final decision then on when and if you are going to use this updated version?
CH: I think the situation for the Renault engine, for the updated version, which they are referring to as the D-spec version, Renault have confirmed earlier today that the conditions for it to run in aren't quite right yet, so that has been postponed to Brazil, which for us makes more sense. We wouldn't want to be taken engines out of the car here or next weekend in Mexico.

I'm sure it's been a very intense period for you, trying to find a way forward for next year and beyond on the engine front. Would it be accurate to say that some kind of deal with Renault or Honda looks likely now or would you rule out those two options?
CH: I think as we sit here there has been a great deal of speculation and interest in what the engine supply we are going to have next year is. As we sit here now, nothing is fixed. There is a lot of discussion going on in the background and hopefully there will be a resolution fairly soon.

OK, coming to you then Eric on that, can you clarify the position from McLaren's point of view with respect to Honda and a secondary supply of engines. Is there an advantage to having another strong team helping to develop the power unit from your point of view?
Eric Boullier: It's difficult to comment, other than we are happy with our partnership with Honda and this is what we wanted to achieve, to be a works team with an OEM. I can't comment obviously on what Christian just said or whatever happens.

From the little running you've been able to do today how much of a step forward is the updated engine that Fernando is running this weekend going to be?
EB: Well, I think we were one of the most active teams on track this morning. We did enough laps to confirm what said after Russia, which is clearly an improvement of the engine. I think all his engineers were happy with the numbers and the mapping they were running through this morning.

Franz, coming to you, another team boss on the lookout for an engine. What are you going to be using next season?
Franz Tost: We will see. We are still negotiating. It is not decided yet. Hopefully it will be soon the case because otherwise the timeframe will become quite small but nevertheless we are still optimistic that we will do it.

As you say, it's getting quite late in the design process. With your resources that you have in Faenza, how much of a challenge is it to build a car now without knowing what engine you're going to be using?
FT: It's a challenge because every day we lose will decrease our performance for next year, but we have an emergency plan for the design office and pay for the production and I'm still convinced we can do it in time.

OK. Matthew, coming to you. Obviously we are aware that the process of being acquired by Renault is ongoing, but how much planning have you been able to do? For example, with the letter of intent were you also given a set of blueprints for a 2016 Renault engine that you can start designing around?
Matthew Carter: Absolutely, yes. Again, it's difficult for us to talk in any great detail but we certainly have an idea of the route we are going to go down next year. We can't confirm anything at this stage but we certainly are heading down that route and things back at Enstone are taking shape.

Now, Romain Grosjean has confirmed he is moving on, does the Renault takeover have to be completed before you make your selection on his replacement?
MC: No it doesn't. I think there will probably be an announcement at some point this weekend with regard to our second driver.

Can you give us a little foretaste?
MC: I can't. The announcement will probably happen in the next hour or so but certainly after this press conference you will be aware of which direction we are heading in.

Very good, thank you for that. Vijay, podium last time out in Sochi. In the last five races Sergio has scored 39 points to Nico Hulkenberg's 14, what's been going on there?
Vijay Mallya: Well, I guess Nico hasn't had the best of luck. He hasn't finished as consistently as Sergio has but I think overall from a team perspective, since we launched the B-spec car in Silverstone we have shown we are a lot more competitive and I'm quite pleased about that. But Nico is a top-class driver and I'm sure he will score points going forward.

Now you and Sauber have made a formal complaint to the EU competition commission. Monisha Kaltenborn was in this press conference a couple of weeks ago in Sochi and spoke about this. Can you share your thought on it and what you believe the outcome will be?
VM: I can't predict the outcome. We have lodged a complaint basically saying that the distribution of Formula One income is disproportionate and disadvantageous to small teams and it's a process and we'll just see where it goes.