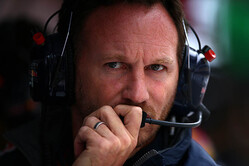 With FP1 proving to be a bit of a damp squib it comes as no surprise that talk of Red Bull once again dominated proceedings.

The latest speculation links Red Bull with Honda, a move that had many wondering whether Texas hosts its own October version of April fool's day.

"So far, we've had the rumour of every single engine mentioned in the back of our car for next year," Christian Horner told Sky Sports F1 when confronted with the rumour, "so they probably have a 25 per cent chance if you look at it that way."

However, when pressed a little harder, he didn't entirely dismiss the claim.

"There is so much speculation, a lot of opinion is being based on it, so when we have something to say and something is fixed... it is being worked on very hard at the moment," he said.

However, the fact is that time is running out. If Dietrich Mateschitz has already decided to walk away from F1 all well and good, but unless Red Bull sticks with Renault - which isn't entirely impossible - any other engine would require some serious changes to the car for next season.

"We need to get something sorted over the next couple of weeks," Horner admitted. "It would be nice to have everything firmed up by the time we leave Mexico, but the likelihood of having it by then is unlikely.

"There is an awful lot going on in the background," he continued. "We have a great group of people and they are very adaptive and so they are doing what they can with the information they currently have. At the moment, they are coping extremely well with that."

Of course, if the Honda rumour contains even a kernel of truth, it remains to be seen how McLaren might react, the Woking team seemingly having exclusive use of the Japanese engines for 2015 and 2016.