In-season engine development to be allowed 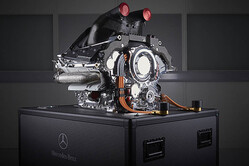 It is understood that following today's meeting of F1 engine manufacturers with the FIA in Geneva, the aim of which was to try and level the playing field in terms of engines, in-season development has been given the green light for 2016.

However, today's meeting saw the manufacturers agreeing to allow 32 tokens again in 2016 and at the same time remove restrictions on those areas in which development was banned next season including upper/lower crankcase, valve drive, crankshafts, air valve systems and ancillary drives.

The move will be welcomed by Renault and Honda, as the 28 February deadline is now removed and they can continue development in to the new season.

At the same time, the plan to force manufacturers to supply the same spec power unit to customer teams as their works team has been thrown out.

Below is the homologation and token system as it originally stood.