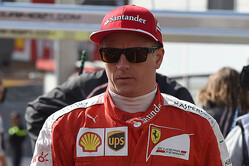 It comes as no surprise that Kimi Raikkonen and Valtteri Bottas see today's incident differently.

His previous attempt to pass countryman Bottas thwarted, Raikkonen made another late attack on the Williams driver in his eagerness to join teammate Sebastian Vettel on the Sochi podium.

Unfortunately, he pushed that little too hard. As the pair headed into T3, he came from considerably way back, desperately trying to take the Williams on the inside.

However, as Bottas turned in, the Ferrari had clearly left his braking far too late and the red car clipped the rear right of the Williams with its front-left, sending it into a spin.

"What the **** did he do," said Bottas over the radio, his race, and podium visit, clearly over.

"As I turned in someone hit me from behind," he subsequently told reporters. "It's really disappointing because it's ruined my day."

"It's pretty bad when it ends up like this," he added. "All the work you've done, it really doesn't matter anymore when you have zero points."

"I passed him before in the same place," insisted Raikkonen. "I got a good run in turn three and there's a lot of space on the inside, I was catching so I try the pass.

"I cannot do anything if he doesn't see me," he continued, "he's turning in and I had nowhere to go. I tried to turn in as much as I could but obviously we collided.

"It's a shame," he shrugged, "but I tried a pass in the normal way but unfortunately it ended up in contact."

Unsurprisingly however, Maurizio Arrivabene saw it slightly differently. "If Kimi had managed to get past Bottas in the final round, that would have further shown that we were on the right tactics," said the Italian. "It's up to the Stewards to decide on the accident they had, but to me it clearly looked like a normal race episode."

The stewards however, didn't see it as a "normal race episode" and deemed that Raikkonen had caused the collision. As it was too late to apply a 10s stop/go penalty, a 30s time penalty was added to the Ferrari driver's time dropping him from fifth to eighth.

The difference between the 28 points Ferrari would have taken away from Sochi, compared to the 22 it ends up with, is enough to guarantee that Mercedes cannot be overhauled in the standings and is therefore Constructors' Champion for the second successive year.

Having started the race from the back of the grid after being hit with a 35-place grid penalty, Fernando Alonso, contesting his 250th GP, lost his sole point for finishing tenth when he too was handed a post-race penalty. 5s was added to the Spaniard's time for exceeding the track limits at T16, thereby promoting Max Verstappen to the final point scoring position.