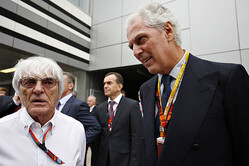 In the moments before the Russian Grand Prix, Bernie Ecclestone announced that Pirelli will continue to be F1's sole tyre supplier from 2017 to 2019.

The 'announcement' came as the cars assembled on the grid for the race, the F1 supremo accompanied by Pirelli chairman Marco Tronchetti Provera. As the two shook hands, Ecclestone grinned and said "let's make a contract", Provera confirming that it would be for three years.

The Italian said that his company "has plans" for "larger tyres", adding that Pirelli has to "agree with FOM and FIA what to do".

Asked if the tyres will be wider, he said, "we are ready to do anything, it is up to FOM and the FIA to make the decision, then we are ready".

Though the announcement will come as news to Michelin, which has also tendered for the contract but is not willing to yield to Ecclestone's demands in the same was ay Pirelli, the new deal has yet to be finalised by the FIA.

"We’re delighted to confirm that we reached a commercial agreement with Bernie Ecclestone to remain in Formula One for the 2017-2019 period," said Pirelli Motorsport boss Paul Hembery later. "The process to the formal FIA official nomination will follow with its procedure."

The news will also come as a surprise to the drivers, a number of whom - prior to being gagged by the F1 supremo - had voiced concerns regarding Pirelli's tyres. Hopefully, since they are the ones putting their lives in the hands of those four piece of rubber, along with FOM and the FIA they will have some say in the process.