Renault has upgraded engine for Austin 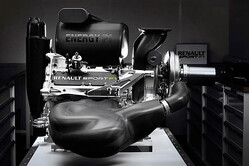 Renault will have an upgraded power unit at COTA this weekend, but will the teams want to use it?

Whereas Mercedes and Honda had used their token allowance for 2015 by the time the F1 circus arrived in Sochi, Ferrari still had four tokens remaining and the French manufacturer its full allocation of twelve.

However, ahead of this weekend's United States Grand Prix, Renault has announced that it too has dipped into its allowance in order to have an upgraded engine for the event at the Circuit of the Americas.

"We will have our new specification power unit available to use in Austin," revealed Director of Operations, Remi Taffin. "The principal changes involve the internals of the ICE to give improved power and efficiency.

"We know that introducing the new unit will incur a grid penalty so the decision to use will be made in full consultation with the teams," he added. "At this point of the season obviously points are crucial so if circumstances allow then we will use on track.

"Whatever spec we do use, we are looking forward to Austin. Our reliability has been good in the last three races and performance more in line with our expectations; both our teams just need a clean weekend to show the improved potential of both packages."

With four races remaining, Renault, which has yet to confirm any progress in its claimed buy-out of Lotus, has also yet to confirm whether it might continue to supply the Red Bull teams with engines in 2016.