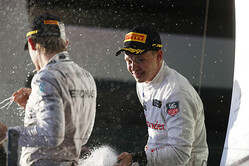 Kevin Magnussen has confirmed that he is no longer with McLaren.

After weeks of speculation, the youngster took to Twitter today, posting: "I want to say thank you to my friends at McLaren. There are a lot of great people there. #GoodLuckGuys."

With Fernando Alonso and Jenson Button both confirmed for 2016, and GP2 champion Stoffel Vandoorne waiting in the wings, it was clear that Magnussen might be surplus to requirements in Woking.

However, whilst there is no doubting his talent, his options are limited, especially with the ongoing threat from Red Bull.

"I've had good talks with a number of teams, and some of them are still going on," he told {i]Motorsport.com. "So I have chances there.

However, he's realistic enough to know that he might need to look outside F1 in 2016.

"I was put on Earth to race, so I'll race," he said. "I don't want to go into details, but I'm pleased to say that a number of exciting opportunities have come my way over the past few days and weeks, and I can tell you for sure that I'll take one of those opportunities, definitely.

Of course, this isn't the first bitter blow the Dane has suffered, having lost his seat to Fernando Alonso despite a confident debut season with McLaren which saw him on the podium in his maiden Grand Prix.

"To be honest, I struggled, particularly at first. But, gradually, I pulled myself together, and I began to immerse myself in the engineering function, both at races and at the McLaren Technology Centre.

“I learned a lot, in fact, especially on the engineering side, and of course, that's an increasingly important aspect of a Formula 1 driver's skillset these days. But of course I'd much rather have been racing, obviously."

Looking back on the excellent performance in Melbourne 2014, he said: "That was a good day. If only Nico Rosberg's Merc had broken down as well as Lewis Hamilton's, then I would have kicked off my Formula 1 career with a win! But, yeah, second place was a good way to start off - I was told it was the best Formula 1 debut for 18 years, since Jacques Villeneuve's second place for Williams, also in Melbourne, in 1996, so that wasn't too bad. And after Australia, I had quite a few good results - I got through to Q3 16 times out of 19, which wasn't too bad for a rookie in a not-brilliant car - and I scored points most of the time, too.

"You're never really satisfied though - I'm always my own harshest critic because the only result that truly satisfies me is a win - but by the end of the season I had reason to be hopeful that I was going to be retained as a race driver for 2015, but in the end, the decision-making process dragged on all through the autumn and I only found out that I'd been dropped in mid-December, which left me no time to find an alternative drive. I was gutted, I admit. Not a great Christmas."

Following claims that he was advised that McLaren was not taking up its option on him in an email, he wanted to put the record straight.

"When the date of McLaren's option on me passed, I was kind of waiting to hear from them. I didn't hear anything for a few days, and then, after about a week, when I saw an email from Ron's personal assistant in my inbox, I had an idea of what it might be.

"I didn't really mind," he adds. "That's just a detail, isn't it? There's no need to make a fuss about stuff like that.

"I'd already made it clear that I was 100 percent determined to race next year, and obviously McLaren already have two contracted race drivers for next year in Jenson and Fernando. So, well, three into two won't go, will it? I was only ever going to have a chance of a McLaren race drive in 2016 if one of them was going to retire or whatever, and that's probably not now going to happen, so it was pretty clear that there was going to be no room for me at McLaren."

Referring to the praise heaped on him by (former teammate) Jenson Button, Magnussen said: "Jenson is a cool guy, a good friend in fact, and it was very nice of him to say those things about me. He was a great team-mate - and a lot faster than most people realise. People tend to regard him as smooth and calm and all that, and that's true, but he's also bloody quick. And this season we're seeing that in fact he's every bit as good as Fernando, which not a lot of people were predicting would be the case before the season started. It hasn't surprised me though, not at all."