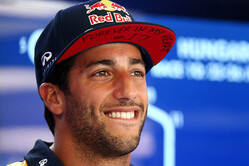 Daniel Ricciardo admits his team is unlikely to use Renault's updated engine this weekend.

The updated power unit, which features changes to the internals of the internal combustion engine aimed at improved power and efficiency, sees the French manufacturer dip into its token allowance for the first time this year.

However, speaking ahead of the weekend, the French manufacturer's director of operations, Remi Taffin admitted that Red Bull and Toro Rosso might elect not to use it as they would incur automatic grid penalties.

Speaking at today's official press conference, Daniel Ricciardo admitted that it is unlikely the new unit will be used this weekend.

"It's available if we want to use it, but that will mean a penalty though," he told reporters. "So we have to understand if it is worth it.

"It is not massive, from my understanding," he continued, referring to the step up from the current unit, "so it is probably not worth taking it. I think we are down such a chunk that I don't think we will gain enough initial time to make it up. If we start from the back, I don't think we will make the ground up we need.

"Right now we are less likely to take it," he concluded, "but hopefully today they will tell me something different and they have found a big chunk of horsepower."