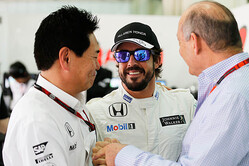 In the wake of another fruitless Sunday afternoon, during which his frustration got the better of him, the Spaniard had to take to social media to confirm that all was well and he was not walking away from the sport.

Shortly before, frustrated by an engine so down on power that he was powerless to challenge for scraps, the Spaniard had launched a blistering attack on Honda, describing its engine as "GP2" standard.

The latest in a series of torrid episodes with the McLaren-Honda, whilst team boss Ron Dennis played down events, Alonso eventually took to Twitter to say he had calmed down and would remain with the team and see out his contract. This followed post-race interviews in which he appeared to suggest otherwise.

Speaking in Sochi, ahead of this weekend's Russian Grand Prix, which will see him have access to the latest upgrade from the Japanese manufacturer, Alonso insisted that he is on board for the duration.

Referring to his radio outburst, he repeated his previous call for some radio communications not to be made public.

"Obviously we have been very positive about the team and the car all season," he said. "We face some difficult times, some tough times as a team, and what you talk on the radio should remain private because you are talking to the team. When you are in a car and in a race, and you try to give it all and you are fighting lap after lap and you keep losing positions easily on the straight, even before the braking point, you get some frustration out there on the radio.

"But I am happy it was only broadcast in Suzuka," he grinned, "because if you hear other races, other radio messages from me or Jenson, you will be even more surprised.

"The most important thing of the Suzuka weekend was the Wednesday when I visited Sakura and I saw the engine programme for next year," he continued. "We had very long meetings and we went through all the difficulties that we are facing right now and all the possible solutions we want for next year.

"That was the most important part of the weekend and the messages were important in the weekend. Those were very, very clear, and more clear than Sunday. Sunday was frustrating, racing the competition against others, but we know where we are lacking and where are the problems. The important thing is to go forward and be positive for next year.

"The meetings before Suzuka are the ones for the Honda guys," he insisted. "If you are concerned what Honda people thought at Suzuka on Sunday, it was Wednesday that was much more important."