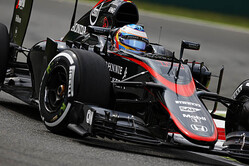 The 2015 Japanese Grand Prix was a disappointing home race for the McLaren-Honda team.

Despite starting from 12th (Fernando Alonso) and 14th (Jenson Button) on the grid, and taking advantage of a couple of first-lap incidents to nick a few extra places, neither driver was able to hold back the stream of faster cars behind them.

Fernando battled gamely against the Toro Rossos of Carlos Sainz and Max Verstappen, and was able to establish an advantage over the Sauber of Marcus Ericsson, to finish 11th.

Jenson was unlucky to fall behind the Swede's Sauber after the second round of pit-stops. That meant he fell into the clutches of a gaggle of faster cars. He ended his afternoon 16th.

"We need to improve the programme. The remaining races will be tough, but we're looking towards next year. We'll win together, and we need to make it happen as quickly as possible. Hopefully, we can learn some lessons from today's race and keep improving things."

Jenson Button: "When there's that much of a speed differential between our car and the others', you don't know what to do. When they overtake you, you just back out of it - there's such a difference in speed, that you can't be sure where they're going to be.

"At my second stop, Ericsson got past me, and that messed up my race because I was quicker, and had the better tyre - I was on the Option, he was on the Prime - for the final stint.

"If I'd come out ahead of him, we'd have been fine, because we were quicker than him, and he was holding cars up behind, which helped Fernando to run his own race. But I couldn't keep the faster cars behind me, and fell farther back.

Eric Boullier, Racing director: "It's not always easy to perceive progress when your overall performance is poorer than two great Formula 1 brands such as McLaren and Honda are used to, and of course none of us is pleased with our 11th and 16th places here this afternoon, but nonetheless there are positives.

"Both cars ran completely reliably to the finish, which is encouraging. No, our friends at Honda didn't get to watch the cars on which they've worked so hard score points in their home race today, but both Fernando and Jenson finished it and it's via such incremental stepping stones that we'll march together to our eventual destination: podiums and victories.

"Finally, I want to pay tribute to our guys, especially the boys in the garage who have worked so incredibly hard, in such hot and humid conditions, over two very arduous back-to-back weekends, here and last weekend in Singapore. Well done!"

Yasuhisa Arai, Honda R&D senior managing officer - chief officer of motorsport: "We received an unbelievable amount of cheers from our fans at the start of the race. As predicted, both our drivers made brilliant starts which put them close to the points-paying positions, but we knew coming into the race that energy management would be tough at this track.

"Disappointingly, we missed out on 10th position, and the final point on offer today.

"Through rain and sunshine, our fans gave us the support we needed throughout the three days of the grand prix weekend. We hope that we'll be able to give back to them soon, by fighting every step of the way to improve in the remaining races of the season and development for next year. I cannot say thank you enough for everyone's support."