Neale hints that Button is quitting 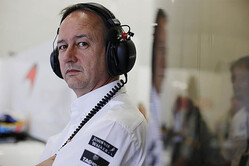 McLaren managing director Jonathan Neale appears to confirm that Jenson Button is to retire from F1.

Whilst the British driver has worked hard not to give anything away, politely answering the endless questions but not actually saying anything, the Woking outfit's MD appears to have given the game away.

Speaking at today's press conference, enjoying a moments respite from the endless questions about the problems his team is encountering since realigning itself with Honda, be it on track or on the balance sheets, Neale was asked about Button.

"Jenson is a fantastic guy, a world champion and a big part of our family at Honda and McLaren for six seasons," he said. "We are contracted with him, we want him to stay and we like him very much, but if your driver doesn't really want to be in the seat, we have to respect that.

"I really hope that we have done enough between us to continue those discussions with him and have the confidence to keep him with us and that is what we would like."

With Button admitting yesterday that he is not getting any joy from F1 at present, it appears the Briton has made his decision.

"I don't think any driver has joy when they are not fighting for victories," he said. "That's what we're here to do, that's what we love, it's the challenge of fighting at the front and the possibility of fighting at the front. I don't like finishing fourteenth, I don't like finishing tenth," he continued, "that's not what gives me joy, that's not what excites me."