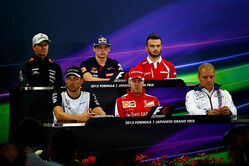 Sebastian, congratulations for last time out, only a few days since your win in Singapore. Is your performance there something you can translate to this track?
Sebastian Vettel: Well, it's a completely different track here but we'd hope. But I think you have to remain realistic. In a way it was a big surprise to see Mercedes struggling, which I don't expect to be the case here. Again, it would be a big surprise. But if the chance is there we have to go for it. As I said, the nature of the track is completely different here. We'll have to wait. The weather could bring a lot of surprises as well. It's going to be a tough weekend.

We know that you love Suzuka - you've won four times out of six I believe and you also won a championship here in 2011 here. So, what can you expect this weekend?
SV: Well, based on that quite a lot! Yeah, I love the track; it's a driver's circuit. I think we all love the track. It's one of the old school circuits on the calendar. It's a lot of fun. If you want to know what a Formula One car can do then the first sector I would say sums it up and says pretty much all. In my point of view [it is] the best track in the world and great fun to be here.

Thank you very much. On to Valtteri Bottas. Valtteri, you had a good race last time out, finishing fifth. Do you think you'll be able to make the same challenge again here in Suzuka?
Valtteri Bottas: It was a good weekend for me. We knew Singapore would be a difficult one, probably the most difficult track for the rest of the calendar. Good to be here because we do think we can be more competitive here than we have seen last weekend. Really looking forward to it. Like Sebastian said, it's a great track to drive. Also, the fans are awesome here, so it's good to be here and we are expecting strong results.

Williams are currently third in the Constructors' Championship, 112 points behind Ferrari and 59 points ahead of Red Bull. With six races of the season left are you, as a team, moving into a testing period for the last six races, with an eye to next year?
VB: For sure we've been developing next year's car already for a long time and we have already done some tests looking more at the future rather than maybe only this season. Yeah, that is one of the targets for the rest of the year, to look ahead to next year but still we want to have good races and if we can find anything for this year's car for sure we will try to do it if it doesn't impact the development of the new car. Still many races to go if we want to gain our position. It would be nicer to be a bit closer to Ferrari also.

Thanks very much. Will Stevens: new team-mate and a new challenge for you. How do you feel about the rest of the season?
Will Stevens: Yeah, I think the year so far has gone pretty good for me. I think Singapore last weekend for sure wasn't one of my easiest weekends of the year but you need weekends like that to improve and to learn from. So heading into this weekend and the rest of the year I don't know any of the tracks, apart from Abu Dhabi, so I have a lot of learning to do. But I always like coming to new circuits, especially here. It's always [been] a circuit I've wanted to drive, so looking forward to getting out there. The weather looks pretty mixed for the weekend so I'm sure we're going to have a very eventful weekend.

What about your future at Manor? Are you seeing lots of progress? How have things changed over the year in the garage?
WS: I think as a team for sure the next few years are going to be pretty exciting for them. This year was always going to be tough, using last year's car with the old Ferrari power unit, so it's going to be as tough as it can [be]. But looking ahead to next year, for me personally we're working hard in the background to try to sort out things for next year, which are looking positive, so we'll see. Hopefully we'll have some things to tell you soon.

Thank you very much. Max, another really good race and result for you in Singapore but pretty controversial. Do you want to tell us about it from your side?
Max Verstappen: Well, I really enjoyed my race. Of course the start was a bit disappointing but from there on I think we had a great pace in the car. Yeah, kept pushing and catching the guys in front of me and at the end to come back in the points was just a great result and, yeah, very happy with that.

Do you want to tell us a little bit more about what happened between yourself and Carlos Sainz and maybe what has happened since the last grand prix to talk about things within the team?
MV: Well I can tell you nothing has changed in our relationship or something. I was trying to overtake Checo, I was very close and I was looking in my mirrors as well. It didn't feel for me that it was close enough to give it a go, so I decided to stay there and at the end we had a conversation about it in the team and everything has been cleared and we are ready to go again here in Japan.

Thank you very much. Let's move on to Nico Hulkenberg. Nico, it was clearly a disappointing result for you last time out in Singapore, after the collision for Felipe Massa. You've picked up a three-place grid penalty as well. Have you had a chance to look back over the incident and have another view of it?
Nico Hulkenberg: Yeah, definitely. Obviously I looked at the video footage and I think I probably should have given him a bit more room, because he was on the inside and I had some space on the right. Visibility is also difficult when you are alongside each other and I thought I was ahead enough, but I wasn't clearly, in hindsight, so we take up the penalty here. But it's behind us, now we move on and make the best of it this weekend.

This weekend, today in fact, Sergio Pérez has been confirmed at re-signing for the team, so a bit of stability in Force India. Why do you think re-signing was the right thing for you to do?
NH: Well, I think for both of us. We work well together. I think we are a strong combination and I think we both have faith in the team and we see still a lot of potential that we can extract and move forward, together with Force India, and I think both of us want to continue growing with the team.