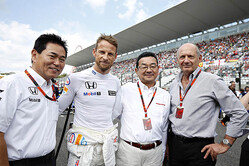 Following another difficult afternoon, during which one of his drivers launched a startling attack on Honda at its home race, Ron Dennis attempted to play down the situation and insist all was well.

Indeed, the McLaren boss gave long - and rare - interviews to both Sky Sports F1 and the BBC following the race, but neither fully convinced.

Asked repeatedly if Button and Alonso will both continue with his team next season, Dennis laughed and said: "Yes, what more do you want?"

"The contract is completely intact and going to be unchanged," he continued, referring to Button. "I've spoken to Jenson about it and he's happy. I never discuss contractual matters if I can avoid it. And even acknowledging the fact there was an option is more than I would normally do. The drivers are all contracted, that's the end of it."

Since the beginning of the weekend, Button has been hesitant to discuss the situation, other than saying he has made a decision and is happy with it and that finishing down the field does not bring him joy.

Indeed, speaking on Friday, Jonathan Neale appeared to confirm that Button is quitting, telling reporters: "We are contracted with him, we want him to stay and we like him very much, but if your driver doesn't really want to be in the seat, we have to respect that."

However, Dennis, who says the team is to announce a "good new sponsor" next week, dismissed this.

"In any relationship, if you feel that the other party is not particularly comfortable and you are doubting that other party's commitment, that is not a good way forward," he said. "If that doubt is removed things change. 'Do you want me? Do you care? Do you believe in me?' That is the kind of sentiment I believe was in Jenson's thinking."

However, Button subsequently appeared to contradict Dennis' claim, telling reporters: "There's been a lot going on. It's not been straightforward, as it might seem from other people's comments. It's a lot more complex than that and always is. And that's why I'm not saying anything else."

Told of Dennis' claim that he would be with McLaren next season, Button said: "I can't comment. "That's his choice. You'll have to wait and see. I'm not going to comment on something that I don't know the future on. I've never talked about our private matters, that's all I'm going to say."

The situation has not been helped by Niki Lauda's claim, subsequently denied by Button, that money is at the heart of the matter.