Honda has upgrade for Sochi 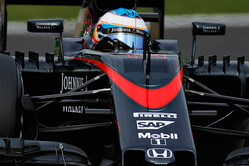 Honda has used the last of its tokens in order to run an upgraded engine in this weekend's Russian Grand Prix.

As the Sochi weekend gets underway, the Japanese manufacturer revealed that it has used its four remaining tokens to improve the core internal combustion engine (ICE). However, only Fernando Alonso will have access to the new unit this weekend.

"We have used the remaining tokens on ICE upgrade, to improve the combustion characteristics of the engine," said a spokesperson. "Due to manufacturing timeline, it was only possible to apply one car with an updated engine. Based on past usage of the ICE, the team has decided to apply this on car 14."

Sadly, this means that the Spaniard, who has already used nine ICE's this season, incurs a ten place grid penalty for Sunday's race.

In the previous race, in Japan, Alonso's frustration finally boiled over, the Spaniard describing the engine as "GP2" standard.

Amidst speculation that he was close to walking away from the sport Alonso subsequently took to social media to say he was wrong to criticise Honda publicly - at its own track - and remains committed to McLaren and its engine partner.

The upgrade means that Honda, like Mercedes, has used its entire allocation of tokens, whilst Ferrari has four remaining and Renault twelve.