Rosberg: It's not over yet! 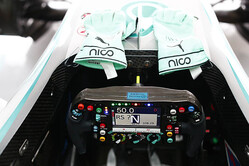 Despite a 48 point gap to teammate and championship leader Lewis Hamilton, not to mention a mere 11 point cushion in terms of Sebastian Vettel, Nico Rosberg insists the fat lady is merely clearing her throat and has yet to sing.

Having taken a convincing pole in Japan, his cause aided by a late red flag, the German appeared to throw it all away next day when Lewis Hamilton forced his way past in Turn 2, never to be seen again.

However, team boss Toto Wolff subsequently revealed that Rosberg had suffered an engine issue which hampered his start.

Ahead of this weekend's Russian Grand Prix, Rosberg insists that far from signalling a weakness, his performance in Suzuka demonstrated his determination to fight for the title.

"Once I got back from Japan, I was able to focus on the positive elements from my weekend in Suzuka: pole position, the on-track pass on Bottas and then having the speed to undercut Vettel's Ferrari at the second pit-stop," he says.

"I'm not backing down in my fight for the championship and gaining those positions back fair and square showed that," he adds. "We have five races to go and, although the championship gap to Lewis is quite big, in my mind it's definitely not over yet."