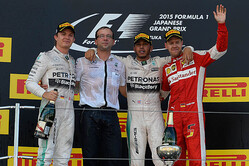 Lewis, congratulations, you equalled Senna's record; tell us about your magic start?
Lewis Hamilton: Yeah, well I firstly have to say a big thank you to all these fans that have come and stood in the rain… I don't know if anyone can hear us… Oh you hear us: Konnichi-wa! Really I'm so happy right now. The team has done a fantastic job this weekend. It's great to be back up here with a one-two. I had a great start. Thanks again to the team for working so hard to make sure we get good starts this race. For me to come here to a race where I used to love watching Ayrton drive and to match his wins… yeah, I can't really describe it, it doesn't really feel real at the moment.

So how important was it for you to strike back after Singapore?
LH: It definitely was important for us to strike back. The Ferraris were incredibly quick in the last race and I guess we didn't bring our A-game, so we really had to take a step back in these last few days and make sure we brought it here and, as I said, couldn't have done it without this team. Just remarkable what they've done. The car was beautiful to drive today.

Thanks Lewis. Coming over to you Nico. Fantastic fight-back to the podium but tell me what happened when the light went out?
Nico Rosberg: Yeah, Lewis just got a better start, fair play, and then it was a good battle into Turn One but in Turn Two he had the inside and just made it stick, so that was the end of it there. Then it was great to fight back to second place, because fourth place would definitely not have been acceptable. Second was the best possible thing after that, so I was happy with the fight-back and great also for us as a team. To be back up here after Singapore is really awesome.

Seems that Lewis is pulling a little bit away in the championship. Can you still catch him?
NR: Yeah, for sure, it's going the wrong way - definitely. I had to win today, that was important but it didn't work out. Just need to try to win next time out.

Sebastian, being here on the podium again after a marvelous victory, what do you think about it in front of these fantastic Japanese Ferrari fans?
Sebastian Vettel: Yeah, thank you very much. It's great to be back on the podium here, it's, I think, my favourite race; I love the track, I love the fans, I love the trophies. Unfortunately, I didn't get the bigger one today; it was close with Nico. I think we had a chance but it's always easy with hindsight. Overall, I think it was a fantastic race. The start was very tricky and it was interesting to see those two fighting in the first corner - obviously I could benefit - but, yeah, all in all, very happy with the race today.

Tell me what direction is Ferrari going in right now - are there more victories to come this season?
SV: I think we are going in the right direction. Obviously we knew from the beginning of the season that these boys would be difficult to beat. They're doing a great job, first of all, both of them. They have a great car, a great engine and all in all it makes them difficult to beat. But I think we are much better than people expected and it's nice, as I said, to be back on the podium here. On top of that it's been 20 years now that I have been with my helmet supplier Arai. I know that I shouldn't probably mention this but it's something very special. I remember when I was a small child walking in, so thanks also to all the people in Japan at Arai and yeah, I love this podium.

Thanks for the commercial block, Seb. Coming back one more time to Lewis. Lewis, we are in the land of karaoke and you are a brilliant singer, not only a brilliant driver, so what will be the song you are going to perform tonight then?
LH: 'Victory Dance'? I don't know! I did a song last night called 'Victory' so that's the one I'll be playing.

Lewis, well done again, congratulations. It seemed to be a trouble-free race once you had taken the lead at the first corner, but we heard one or two mentions of heat in your seat, which we've heard before, and also vibrations as well, so how bad was that?
LH: It wasn't too bad, I've definitely had worse. It was such an amazing race. This has been a circuit that I can honestly say that I've struggled [at] through all the years that I've come here but one that I've loved driving, and I think that goes for all the drivers. But you really want to come here and dominate at a track like this. I was able to get the balance in the right place, my engineers did an amazing job - Bonno, Ricky and just the whole crew did a great job to get the car, with the short amount of time we had, in a beautiful window. It was better today than it was even in qualifying. I was really able to work on my lines and improve and at the front there it was just a beautiful… it's like sailing. When you go through the corners here, it's flowing. Honestly, I wish I could share the feeling with you. Also knowing that this would be the race that I would equal Aytron, who won here and who had quite an interesting here. So, yeah, quite an emotional day. But to be honest I'm not a teary guy, so I'm just full of joy and happiness and light and I'm really grateful for, as I posted the other day, all the people who have helped me get to where I am today and this team, because without them I would not be here.

Nico, can you be as ecstatic about your car as Lewis was about his? And what about toughing it around the outside at that first corner?
NR: Yeah, for sure the car is really back to its best now and that's reassuring after Singapore, so that's great. Especially in qualifying, it's just a pleasure to drive. Like on rails. Then in the the race, yeah, start of course. Pity to lose out at the start and then big battle around Turn One and Two and got very close on the exit of Turn Two so I had to back out of it there and that lost me the race eventually.

Sebastian, it seemed to be damage limitation. You couldn't really prevent the undercut and from then on, was there anything you could do about the Mercedes?
SV: Well I think we thought we were safe because tyres were in reasonable shape but I think Nico was a surprise, the pace he had in his out-lap. So, I was very happy with the in-lap, which goes at the same time, but it was a question of a couple of tenths. Into Turn One he just had the upper hand and then it was clear it would be difficult because he was catching before. So, also the fact that Lewis disappeared: they had a bit more speed today so, yeah. Had we pitted one lap sooner I think it could have been more interesting and challenging for Nico to get past. It's not so easy to follow the cars here through the high-speed sections, so I think we had a good chance but, yeah, probably underestimated the out-lap that he had, so, with hindsight, it's always easy so, nevertheless, it's a great day. Good recovery. Especially as Friday wasn't that good for us. I know it was wet but still, the feeling we go was not that great. Saturday morning as well. So, yeah, good quali and obviously that was the base for another podium today.