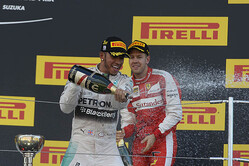 Mercedes driver Lewis Hamilton has won the Japanese Grand Prix with a medium-medium-hard tyre strategy from second on the grid. The Englishman gained the lead at the start and then built up a sufficient advantage that he was able to rejoin the race without losing command after both pit stops. He has now matched the benchmark of Ayrton Senna, with 41 wins, while Mercedes registered its eighth one-two finish of the season.

The three drivers behind Hamilton used a different two-stop strategy: medium-hard-hard. Throughout the top 10, there were a number of different strategies designed to help give drivers a tactical advantage, aided by the timing of the pit stops. Nico Rosberg, in particular, used the 'undercut' to pit earlier than his direct rivals and move up to second place, having dropped to fourth after the start. Sebastian Vettel finished third for Ferrari: only Hamilton, Rosberg and Vettel can now theoretically win the championship this year.

The majority of competitors stopped twice in Japan, with just Sergio Perez (Force India), Daniil Kvyat (Red Bull), Felipe Massa (Williams) and Will Stevens (Manor) stopping three times. Perez, Massa and Red Bull's Daniel Ricciardo all picked up punctures as a result of Turn 1 incidents, which forced them all into first-lap pit stops. Following Carlos Sainz's broken front wing after a collision, some debris left on the track caused a number of cuts to the tyres, without consequence.

Track temperatures, which peaked at 42 degrees, were the warmest they had been all weekend in Suzuka, adding a further complication to the strategy. The teams headed into the Japanese Grand Prix lacking dry weather data, as the two free practice sessions on Friday were dominated by rain.

Paul Hembery: "There was a strong and consistent performance from both our nominated tyres from start to finish of the Japanese Grand Prix, despite the highest track temperatures we have seen all weekend, as well as the high energy loads and abrasive surface that Suzuka is famous for. We saw a wide variety of strategies in place throughout the race and different thinking on the best way to use the tyres, with the timing of the pit stops turning out to be crucial. With the rain on Friday, the teams did not have their usual amount of data heading into the weekend, which made the way that they were able to read the race and get the best out of the tyres all the more impressive."

We predicted a two-stopper as being the best option for this 53-lap race, starting on the medium, changing to the medium again on laps 16-18 and finally the hard on lap 33-35. Hamilton followed our prediction almost exactly, stopping on laps 16 and 32.