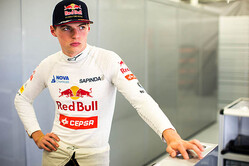 Max Verstappen has been handed a grid penalty for "endangering" other drivers.

The 17-year-old was hauled before the Suzuka stewards after today's qualifying session in which he put the Toro Rosso 15th on the grid.

Having made it to Q2 he suffered a "system black out" at the start of the session which effectively shut down his car's electrics.

He climbed out from his car, which was still on track and headed back to the pits, helmet still in place, clearly frustrated.

However, his frustration worsened when he was called by the stewards for allegedly driving his car in a manner which could be deemed potentially dangerous to other drivers or any other person at Turn 11.

The stewards, having seen video evidence and heard from Verstappen and a team representative, said the Toro Rosso driver had stopped on the racing line in a potentially dangerous position.

Handing him a three-place grid penalty, they ruled that having experienced a sudden power loss at the exit of turn 11, Verstappen initially moved to the left side of the track towards a safe position and when it was about to stop, moved to the right onto the racing line, where it eventually stopped. This caused double yellow flags to be shown and endangered oncoming drivers.

The yellow flags which resulted from the incident were to cause several drivers to abort their first fling laps.