No further action on Vettel 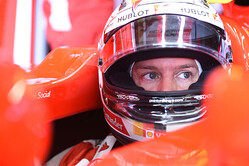 The Ferrari driver was alleged to have cut across the Force India driver's line as he performed a practice start at the very beginning of the session.

Accused of leaving the pit lane in a dangerous manner, a breach of Article 30.13 of the FIA Formula One Sporting Regulations, having spoken to both drivers and viewed video evidence, the stewards deemed that no further action was necessary Hulkenberg stating that Vettel did not drive in a manner that was potentially dangerous.