Business as usual as Hamilton takes victory at Suzuka 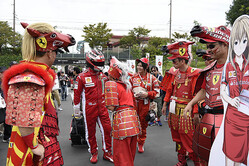 Whatever the result, today's race is dedicated to Scruffy, one of the Pitpass cats. A valued and much loved member of the team since May 2009, who died instantly last night after being hit by a car.

No, you don't get such nonsense on the Sky Sports F1 website, or the BBC, Autosport or Motorsport.com, but then again, at Pitpass we prefer the personal touch.

Needless to say, it's going to be a difficult day for the team, in much the same way as Jenson Button and a number of fellow drivers face difficult afternoons.

Lewis Hamilton claims that had it not been for the red flag following Daniil Kvyat's horrendous crash he would have taken pole. Fact is, teammate Nico Rosberg looked smoother, and quicker in both of yesterday's sessions. On the other hand, at least Lewis has the comfort of knowing that Singapore, contrary to what the doom merchants were saying, was just a blip.

Williams is looking strong here this weekend, and while Bottas benefitted from that red flag, the Martini liveried cars look good here and showed strong pace on their longer runs yesterday.

If Mercedes proved the doubters wrong, Ferrari, on the evidence thus far, has been a bit of a let down. However, for much of the season the red cars have been better on Sundays - when it matters - than Saturday afternoon. 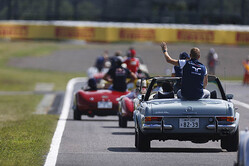 If Daniel Ricciardo has looked to be a man on a mission this weekend, not so teammate Kvyat, who though quickest on Friday, was extremely erratic yesterday. Thankfully he is unscathed after yesterday's horrific crash - which is more than be said for the car, which has been completely rebuilt - so it will be interesting to see how he recovers today.

Another bravura performance from Romain Grosjean who, despite Lotus' many issues, on and off track, gives 100%. Hopefully his efforts will be rewarded with a few points rather than an early bath he's suffered in a number of recent races. As for Pastor Maldonado, let's just hope he brings the car home.

Following his penalty for endangering other drivers after parking his car on the racing line, after its electrics failure, there have been the anticipated 'Mad Max' headlines. The Faenza outfit has had an up and down season, but hopefully they'll leave here with something... if not an engine deal for 2016.

Fernando Alonso described his Q2 lap as one of the best of his career, and though promoted to 12th on the grid following Hulkenberg's penalty and the need for Kvyat to start from the pitlane, the Spaniard deserves better. As does teammate Button. 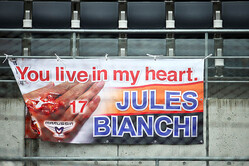 Another team 'enjoying' an up and down season is Sauber, where both drivers deserved better yesterday. Barring problems, or maybe because of problems, one of them should grab a point or two this afternoon.

Manor's weekend, as expected, has been overshadowed by the memory of what happened here last year, the popular little outfit still in mourning. No doubt the team will be glad to get this one out of the way and move on.

There is a long history of safety cars at Suzuka, with the first and final corners often being the cause of a few problems. If nothing else, one of the legacies of last year's nightmare is the Virtual Safety Car, it's just sad that it took such a tragedy to see its introduction.

Tyres are hard and medium, however, after Friday's wash-out, with the teams lacking data for their strategy calculations compared to a totally dry weekend this could affect each team's full understanding of the complete picture. Two stops are expected for the 53-lap race.

The fastest strategy would be to start on the medium, change to the mediums from laps 16-18, hards from laps 33-35. A three-stop strategy is also possible, but this isn't as quick.

There is one sole DRS zone, on the main pit straight. 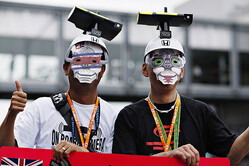 With Ferrari unlikely to worry Mercedes too much today, those of us who want to see the title fight go down to the wire - or somewhere close - must rely on Rosberg to do the business. However, after an unconvincing start to the season and subsequent revival, there followed another slump. He has the ability we're just not convinced that he believes it.

The pitlane opens and one by one the drivers make their way to the grid, most masking a number of detours back into the pitlane along the way. A big lock-up on the way to the grid for Vettel.

Air temperature is 27 degrees C, whilst the track temperature is 38 degrees. It is bright and sunny, with the weather gods unlikely to make an appearance. That said, rain overnight has left the track a little 'green'.

Apparently Rosberg is suffering a headache, the German looking far from happy as the team gives him a couple of paracetamol.