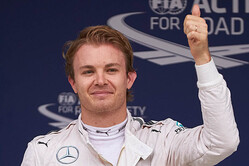 Nothing to separate the two as the Silver Arrows secure 10th front row lockout of the season.

Nico took his second pole position of the season at the 2015 Japanese GP and his second consecutive pole in Japan. Lewis claimed P2, just 0.076 behind Nico, to make it an all-Mercedes front row lockout for the tenth time in 2015. A red flag brought the session to an early end without any driver completing a final flying lap, meaning times from the first run set the grid. Both drivers ran twice in Q1 (prime/prime), once in Q2 (option) and twice in Q3 (option/option).

Nico Rosberg: It was difficult to set up the car here for the dry conditions, because we had the two wet sessions yesterday. But when we were able to practise some high fuel and qualifying runs, today I got a really good feeling. I nailed my laps and I was already on another good quick lap when Dani hit the wall. Then the team informed me that he is fine so we were all very happy to hear that. I'm confident for tomorrow. Thanks to the team for this car, It seems that we are coming back stronger here than in Singapore.

Lewis Hamilton: The car feels perfect this weekend. My engineers did a fantastic job and I enjoyed the battle with Nico. He did a great job and it was exciting today. This is a track where you're constantly fighting to gain more and more; the last lap started so well and I was up by turn seven but the red flag came out in the end. It was a big crash but fortunately Daniil walked away. Tomorrow is going to be hard; it depends on the conditions. The start will be crucial as you can't follow closely here and it will be hard to pass but I will give it my best shot.

Toto Wolff, Head of Mercedes-Benz Motorsport: First of all, the most important thing is that Kvyat is okay after a big shunt at the end of qualifying. But then, of course, we're pleased to see that we are back on form at this circuit. I don't want to say that the status quo is resumed, because that would mean it is somehow automatic for us to be at the front each weekend; it's not, and the team and drivers have done a fantastic job to deliver this afternoon. We know we didn't get everything right in Singapore, today we managed to do that and qualified on the front row with a good margin. At the end, we'll never know what was still to come on the final run of Q3 - both drivers still had time to come, so it would have been an intriguing battle. But today, it was Nico who emerged on top and well done to him; the battle between him and Lewis has stayed close all year, with just a tenth or two between them, and they are both still pushing very hard. Looking to tomorrow, there are some question marks about the weather and, of course, we're all heading into the unknown after we lost Friday's running to the rain. So I'm expecting a big battle between our boys - and some surprises in the race.

Paddy Lowe, Executive Director (Technical): It's good to hear that Daniil is okay after his big accident brought qualifying to an early end and curtailed the final runs for all the players. Congratulations to Nico on his pole, both he and Lewis did a great job. It was a difficult situation today as we tried to compress all of our practice running for race and qualifying preparation into a single one-hour session this morning after we couldn't run in the dry yesterday. The team did a great job to react and mastered a busy session and lunchtime very well indeed, making the right changes and extracting good pace from our car to secure the front row. We're hoping for a dry race tomorrow - without necessarily assuming this will be the case - and have put a lot of work into our start preparation. It will be a big priority to maintain position into Turn One, and then run a good race to bring two cars home to the finish - something we haven't managed to do since Spa.