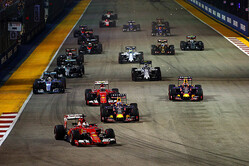 Though delighted with his domination in Singapore, having taken pole and led every lap of the race, Sebastian Vettel is refusing to get carried away, believing, like many, that the weekend was merely a blip for Mercedes.

"In a way it was a big surprise to see Mercedes struggling, which I don't expect to be the case here," he told reporters at Suzuka. "Again, it would be a big surprise. If the chance is there we have to go for it, but you have to remain realistic.

"The nature of the track is completely different here. We'll have to wait. The weather could bring a lot of surprises as well. It's going to be a tough weekend.

"Looking at the results so far this year, we've had a great car on every track, every nature of circuit," he added, "street circuits like Monaco, Singapore we've been competitive but on other tracks as well like Malaysia. Probably Silverstone was one of the weekends where we lost a little bit of that but then again you look at so many races in the same year and you know we weren't completely off the pace so I think we can be reasonably confident but of course we have to remain realistic.

"I think we've learned along the way so hopefully that means that we will be a bit stronger again but the favourites I think still have to remain Mercedes with their two cars."

"How seriously I take it hasn't changed since Malaysia," said the world champion, referring to the threat from Ferrari. For me everyone's a threat and they have been since Malaysia. Since then they've always been in view, we've been aware of them all year."

Unable to give a credible explanation for his team's Singapore slump, Hamilton merely said: "I can't tell you what the team have come up with but they have come up with a lot of solutions, a lot of reasons for it being the way it was.

"The majority of them believe that at least one of the many reasons they came up with had a domino effect. So I'm confident that it's been understood but they will still continue to do analysis for sure."